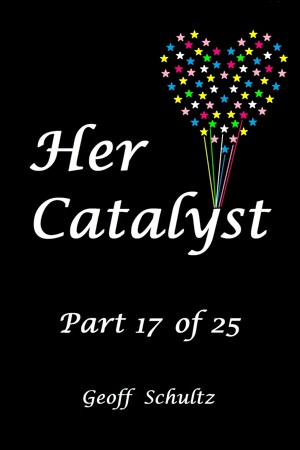 Rebeka hesitates a little then opens her sketch pad to the drawing as she says, “It’s still rather rough, but here’s what I’ve done so far.” She turns the sketch pad around to show them.

He looks at it a little longer, even turns it to look at it from different angles, then shakes his head and says, “You’ve done it again.”

“Captured the essence of the scene and translated it into a two dimensional drawing.”

Rebeka looks at him in surprise then asks, “Um, do you see something more than Angelisa staining a piece of wood?”

“I see a person who cares about doing an excellent job, who’s concentrating on getting it right, and who takes pride in knowing they’re doing it to the best of their ability. In other words, this is a drawing of a craftsperson in the old meaning of the term. Rather than showing someone who is slapping picture frames together as fast as they can, you’ve caught the attitude of Angelisa who wants to make the best picture frame possible so it complements the drawing it will hold.”

“She was really concentrating on it and being very careful with the paint brush.”

He nods his head, “And you’ve translated that into the drawing. She was showing how much she cared about doing her work to the best of her ability and you saw that and this is the result. It’s a beautiful drawing which both of you used your own gifts to produce. It’s a wonderful collaboration, ladies.”

“Thank you, George.” Rebeka pauses then asks, “So what kind of series would this be a part of?”

“I have a part of an idea, but before I say it, I want to make it clear that I’m not trying to be offensive or to bring up painful memories.”

“Do you think I might be having some sort of reaction to my abuse?”

“Not reaction which gives a negative connotation, but a response in the sense of having something positive develop out of it.”

Since she isn’t quite sure she understands, Rebeka simply responds, “Okay,” in a way which she hopes will encourage him to express his idea more fully.

He pauses to think for a little while before he says, “I’m going out on a limb here, but I’m guessing that when you were being abused, you resented being treated as only a sexual object rather than as a full person with your own thoughts, hopes, and dreams. In this drawing, you show that a woman can be an accomplished craftsperson with talent and pride. I’m going to further guess that you would like to somehow show that women are more than sexual objects and that they have intelligence, talent, determination, and pride and can do anything they want to do within their capabilities, just as any man.”

Rebeka nods her head and proclaims, “Damn right I want to show that, . . . but how do I do it through drawings?”

“Draw portraits of women in various jobs and show that they take pride in what they do. . . . I was going to suggest Sharlene as a brain surgeon, but it might not be appropriate to show her cutting into a brain. Instead show her studying a scan of a brain. Or you can draw Klara as a lawyer in a courtroom and maybe Maria as a restaurant owner with her menu in one hand and serving a wonderful meal in the other. Paula’s a business owner, but I’m not sure how to make that clear with a drawing. I’m sure that if you think about it, you can come up with more women you know who have important jobs they do well and take pride in doing.”

After she stares at him with wide eyes for awhile, she quickly steps close, tightly hugs him, and exclaims, “That’s it! That’s what I was feeling!”

After decades of doing office work from which he escaped to read books and occasionally write something in the evenings or on the weekends, this writer was finally able to retire and moved back to the dry heat land of saguaros, Gila monsters, and bark scorpions (while they can be a low maintenance pet, they are not amenable to leash training).

In spite of the typical reactions to this writer’s stories, it is hoped that some one some where will read them and might find a small value in them and be inspired to either chuckle, smile, or consider an idea which is new to them. To encourage that possible outcome which might briefly brighten someone’s life, this writer’s stories are being offered to the reader to enjoy for free (click "Buy" and offer $0.00). Hopefully, you’ll find that you are receiving more than you paid for them. If you like a story, please consider sharing a donation with the writer by buying another copy (for more than $0.00) and giving it to a friend.

In regards to the stories which Glynn Glenn requested this writer rewrite and release under his own name, or inspired him to write (such as The FIRST Attitude), many of them are what Glynn Glenn has described as ‘love stories’. Although some of those stories contain detailed descriptions of intimate activities between consenting adults, they are not intended to arouse the reader as is the intent with erotic stories. Indeed, those who typically like to read erotica will probably be disappointed with love stories. Instead, Glynn Glenn attempted to encourage people to treat their current or future intimate partner with gentle respect instead of acting like animals which are driven by their hormones to breed. The stories will also hopefully encourage people to take a more gentle and usually a more gradual approach to intimacy than most people would be inclined to consider. In that sense, Glynn Glenn’s longest love story might be viewed as a guide which provides a step by step process (in a more readable story format) for people to possibly follow as they gently expand their interaction from sharing physical affection in the form of hugs and kisses to sharing intimate pleasure (described in Her Catalyst as a journey of touching). Those people who are interested in reading romance stories (where, after experiencing several lovers, the characters finally believe they’ve found Mr./Ms. Right) will most likely be disappointed with Glynn Glenn’s love stories even though the category of ‘romance’ is probably the most appropriate. In contrast, love stories, as least as Glynn Glenn has described them, are stories where two consenting adults either develop or already have a friendship which is based on acceptance, respect, trust, and care and the story describes how they grow closer together as people and eventually mutually share the pleasure of full intimacy.

You have subscribed to alerts for Geoff Schultz.

You have been added to Geoff Schultz's favorite list.

You can also sign-up to receive email notifications whenever Geoff Schultz releases a new book.