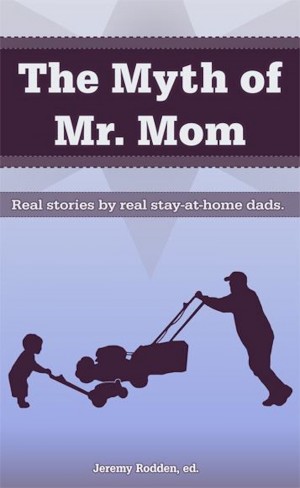 The goal of the book is to help bring awareness to the fact that men are just as capable as women of being the primary caregiver, homemaker, and stay-at-home parent. We feel that there is a societal bias against stay-at-home dads that does not exist for stay-at-home mothers and seek to bring our stories to the public.

I spent the first ten years of my professional life in retail sales, working my way up to store management positions in two different Fortune 500 retailers. Along the way, I managed to earn a BA in Religion and English Writing from La Salle University in Philadelphia, PA and an MA in Secondary Education from Holy Family University, also in Philadelphia.

After completing my Masters, I began teaching high school English. When my second son was born in May, 2010, however, my wife and I decided that it would be more prudent for me to be a stay-at-home dad, taking care of the new baby along with my first son, who was born in June, 2005. I have since had the challenge and pleasure of being a homemaker.

It was at this time that I finally grasped the stories that had been in my head since I was a teenager and wrangled them to paper. Toonopolis began as a silly interactive fiction game played with some real life and virtual friends. The game only lasted a few years but the world I had created and my characters never escaped my thoughts.

As a writer, I consider C.S. Lewis and Lewis Carroll as my strongest influences. They were able to create magical worlds that readers of all ages enjoy, which is exactly what I want to achieve with Toonopolis. It is a lofty goal, indeed, but the only goals that will invariably be unachievable are the ones that are not set.

Welcome to my world. I hope you have as much fun as I do.

It’s the typical Ladybird book image: Daddy with a saw and Mummy with an apron and a baking tin and it can often catch people unawares to see anything other than this, even though the family dynamic is a constantly changing thing.

I had firsthand experience of this recently. My husband is much better at housework than I am but I’m (affectionately) known as “DIY Donna”. So when David left to go to work recently and the door was sticking, I grabbed my rasp and file and set about fixing the problem. And boy didn’t I get some strange looks! Granted I was wearing yellow pyjamas with little pink pigs on and a pink towelling robe but I can’t help but wonder if a man in a dressing gown would have been met with quite the same incredulity.

I have to say, I’m not remotely maternal in the conventional sense (i.e., unless the children in question are furry with paws) so I couldn’t compare my own experiences of parenthood but I have faced stereotypes myself: I’m a woman so I must want children. I have six cats so they must be child substitutes. I’ll reach a ‘certain age’ and suddenly my biological clock will kick in. All poppycock, of course, so I was interested to read The Myth of Mr Mom to read about the writers’ experiences of facing – and hopefully overcoming – gender stereotypes of a different kind.

There are eight stories in The Myth of Mr Mom and surprisingly each one is quite unique, something Jeremy Rodden himself comments on in the afterword. These stay-at-home-dads or stay-at-home-pops (and my word even their abbreviations of SAHD and SAHP seem to start them on the back foot) have faced many similar scenarios or battles but each has started from a different point and approached their journey in a different way.

There were two stories that really stood out for me. One was a very humorous tale from Christian Jensen (“Mr Mom: A Retrospective”), which amused me greatly but also underscored my reasons for not wanting to be a mother. (Sorry Christian: I’m guessing that wasn’t your main aim!). I say that because there’s a clear an evidence love for Jensen’s children evident throughout the essay, despite the dry wit and sarcasm, which made it very touching but also made me very aware that I wouldn’t have the patience or compassion to take on his role!

The other story that touched me was “Little Pink Umbrella” by Charlie Andrews. It touched me because I loved the idea of the father who stands, quite willingly, on a corner with a little pink umbrella, waiting for his daughter. Of course, there is a much more to the story than that but it stopped me in my tracks. My own father did many things for me that I daresay didn’t fit with his ‘conventional role’ but which he did for my sake. This is the aspect of fatherhood that often goes unrewarded or even unacknowledged. We joke about man flu or the father who can’t even get a diaper on. We assume that a man with a baby is stepping in or has been ‘lumbered’ for the day (my great maternal instincts kicking in again there!) but actually we often do ‘fathers’ the same disservice that woman as a whole were done for many years. We make baseless assumptions about their validity and societal value, their roles and responsibilities and most of all, who they are.

If The Myth of Mr Mom had a flaw for me, it’s that I would have liked to read an essay from someone much older who had really had to fight against the norm, not just of recent decades but an earlier, stauncher and perhaps more judgmental time period. Not that the stories contained are not inspirational but I think that would have added an extra dimension for me. However, Rodden mentions a potential second volume so perhaps this is a tale yet to be seen.

I have made this a ‘Christmas Pick: For Dads’ because I don’t think you need to be a Stay-at-Home-Dad to enjoy it. In fairness, I don’t even think you need to be a male to enjoy it. However, I do think it will resonate with loving fathers because the key thing that links all of these stories is fatherly love and bundles of it. Buy this for your father and show them not only that you love them but that you love the love that they gave you and that every sacrifice – large or small – has not gone unrecognised.

Yup the stay at home dad. I always thought I had a pretty good outlook on stay at home dads and actually know a few (dad's of kids who are in my kids class at school) I applaud any man who decides to take on this role, but after reading this I only wish more men would stand up and proudly shout to the world, "I am a stay at home dad and I am proud of it"

I loved this anthology, but have to say that I "connected" best with the second chapter, an essay from Christian Jensen. From the get go he could have been describing my daily life, other than my kids get up before I do, can't imagine trying to write anything before 6:30am and don't have quite his quirky sense of humor. (though I love it!) I laughed so hard I cried reading this essay and will be happily reading it out loud to my own husband when he returns from drill this weekend, I think he will find it rather amusing as well.

I love that he...well I don't want to spoil it, but let me say his "encouraging" notes on the kids lunch sacks are priceless. Makes me think of the time I proudly walked my kids to the bus in my penguin flannel jammies, old ratty robe, and hubby's slippers because the driver has asked to speak with me about my the youngest boy's actions while he rode the bus. Utter humiliation for the child, yup. Will he act up again on the bus...probably not. LOL

Yes even though I am a stay at home mom, which seems to be more accepted in society, I understood, agreed with, and nodded along with these essays. You see it doesn't matter who's at home, mom or dad, we deal with the same issues, challenges, and we enjoy it. So the next time you meet a stay at home dad, don't think less of him, shake his hand and congratulate him for choosing what I think is the most rewarding job there is. Yes it is a job, without a paycheck, no vacation time, but none of that matters when the kidlets snuggle up, give you smooshy kisses and say you are the best mom/or dad in the world.

Whether you are a mom or a dad or an aunt, uncle or even just thinking of having kids, you need to read this anthology, it is worth it and I can't wait to read more. (hint hint Jeremy, start planning the next installment please)

You have subscribed to alerts for Jeremy Rodden.

You have been added to Jeremy Rodden's favorite list.

You can also sign-up to receive email notifications whenever Jeremy Rodden releases a new book.