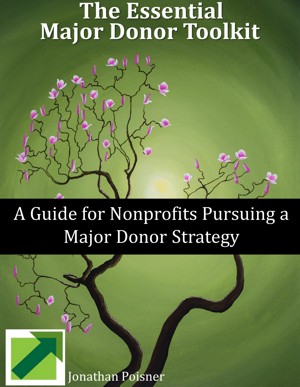 By Jonathan Poisner
This book outlines a systematic approach and corresponding tactics that any small or medium sized nonprofit can use to pursue major gifts as a fundraising strategy. The lessons stem from the author's 25 years of experience in the nonprofit sector as an Executive Director and consultant. The author aims to for this to be a Toolkit and not just a book, serving as a practical step-by-step guide More
When I was hired as Executive Director of the Oregon League of Conservation Voters (OLCV) in late 1996, I had never raised a dime. The board probably shouldn’t have hired me.

Yet, they did. And it became quickly apparent that fundraising was Job One. OLCV had just two permanent employees at the time (me and a half-time office assistant), along with one other employee on a short-term contract for the legislative session. In contrast, I had big ambitions for the group to become a force on behalf of clean air, clean water, and a healthier environment. I knew that would take money. A lot more.

And so I just threw myself into fundraising. I got myself training. I read books on the topic. I forced myself to stretch outside my comfort zone to call donors and meet with them in-person. I worked with the board (which was thankfully open to it) to play their part.

It worked. The organization grew. I did some things clearly right and others that, in hindsight, I grimace to think I did.

At various points over the next decade, I received further training and more than once I found myself having markedly more success as a fundraiser based on applying the lessons I learned.

I left OLCV a dozen years after I started having grown its budget 10-fold, with a staff of 10. We were not a large organization, but we’d made the transition to “medium sized” based on a relentless focus on building relationships with and securing donations from individuals.

Since I left OLCV, I’ve worked as an organizational development consultant, with a focus on strategic planning and fundraising. As a consultant, I’ve learned even more about fundraising from talking with dozens of nonprofit fundraising professionals working in the trenches to hear their stories and review data.

This book is my attempt to succinctly lay out what it takes for any small or medium sized nonprofit to systematically pursue major gifts from individuals. I hope it proves to be a worthwhile companion to my other E-book, Why Organizations Thrive: Lessons from the Frontlines for Nonprofit Executive Directors.
Download: epub mobi (Kindle) pdf more Online Reader
lrf pdb
Price: Free! USD
Add to Library
Create Widget
Tags: nonprofit fundraising donations nonprofits
About Jonathan Poisner

Jonathan Poisner has over 25 years of experience in the nonprofit sector.

In 1997, Jonathan became Executive Director of the Oregon League of Conservation Voters and its sister organization, OLCV Education Fund. During his twelve years leading OLCV, he grew the combined revenue of OLCV and OLCV Education Fund from $200,000 to $1.1 million per year.

Jonathan served on the founding board of the Federation of State Conservation Voter Leagues, where he was a strong voice for growing state LCVs. From 2007- 2009, Jonathan was elected to serve on the boards of the League of Conservation Voters and LCV Education Fund.

Jonathan holds dual degrees in Economics and Political Science from the University of Pennsylvania. He has a JD from Boalt Hall School of Law at UC Berkeley.

Prior to his tenure at OLCV, he practiced law as an associate attorney at the law firm of Arnold & Porter, served as Environmental Law Fellow at Lewis & Clark Law School, worked as an Adjunct Law Professor, and served on the regional staff of the Sierra Club.

You have subscribed to alerts for Jonathan Poisner.

You have been added to Jonathan Poisner's favorite list.

You can also sign-up to receive email notifications whenever Jonathan Poisner releases a new book.