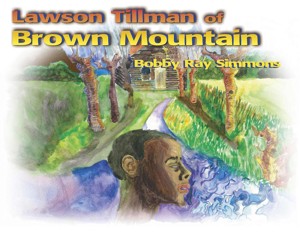 Tattered by the external influences of racial exclusion and shady communal mores, the Tillmans see little hope in ever evolving from their binding fate. But young Lawson, who is horribly beaten at the age of two, finds courage and an urgency to move beyond his seemingly broken life through the image of a beautiful young girl named Renee’. Renee’ became a rescuing angel that unknowingly led Lawson out of his downward spiral of personal decay.

The Lawson Tillman of Brown Mountain story offers a riveting saga of a family inching its way out of sustained hardship as it faces uncompromising external and internal odds.

Bobby Ray Simmons is the seventh child of Joseph and Josephine Simmons, born in 1957 in Westfield, North Carolina. After finishing North Stokes High School (Danbury, N.C.), where he was a three sports athlete: Football, Basketball, and Track and Field; he matriculated into post-secondary education, and is an alumnus of three renown colleges: AAS in Electronics Engineering Technology (Surry Community – Dobson, N.C.); BS in Mass Communications (Winston-Salem State University – Winston-Salem N.C.); Master of Divinity in Philosophical Theology (ITC – Atlanta, GA.), and pursues the PhD degree in Systematic Theology (Emory – Atlanta, GA).
He is celebrating his 32nd year in the ordained Christian Ministry, and pastors Holy Union Christian Church in Atlanta. He has authored many theological articles, Biblical critiques, and books, including, Five Steps toward Salvation: A Guide to Christianity; Daughters of the Light; and Lawson Tillman of Brown Mountain.
Bobby has given theatrical and screen production rights of Lawson Tillman to his daughter: Arielle Simmons, who is directing the play scheduled for July 16-18 2010, at 7 Stages in Midtown Atlanta.
His hobbies are residential construction and remodeling. He is a student of the languages: Greek, Hebrew, Spanish, Latin, Arabic, and German. Bobby’s honors and awards include the following: Valedictorian 1993 ITC, International Society of Scholars (Theta Phi); Benjamin E. Mays scholar; Who’s Who Among American Universities and Colleges 1992.
He is married to the former Karen Hill of Atlanta, Georgia and they have four children: Victoria, Jamaal, Bobby, Jr., and Arielle. His favorite motto is “One in Christ”.

You have subscribed to alerts for Bobby Ray Simmons.

You have been added to Bobby Ray Simmons's favorite list.

You can also sign-up to receive email notifications whenever Bobby Ray Simmons releases a new book.