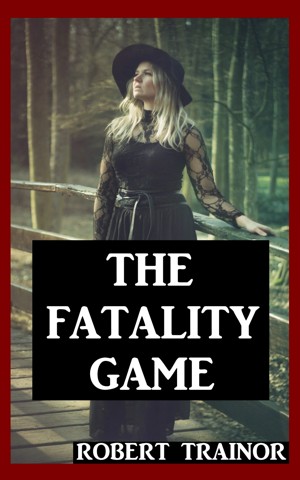 By Robert Trainor
An exclusive neighborhood is plagued by crimes that appear to be pranks. But the pranks turn deadly when four people are murdered. More
NOTE: This novel can also be purchased with eight other murder mysteries of mine for $1.49 in an anthology entitled Nine Murder Mysteries.

The residents of Barksdale Terrace live in an exclusive neighborhood of multimillion dollar houses where crime is something that happens to other people. But within a seven-day period, the bedrooms in two of the seven houses on the Terrace are ransacked while the occupants are away. Both crimes are very bizarre and strikingly similar: There is a balled-up sheet jammed into an open window; in the middle of the balled-up sheet is a copy of Playboy magazine; and there is a peculiar message written above the bed in the room. Sorry you weren't here. Even so, you should consider buying tickets for your own funeral because the fatality game will soon be claiming its first victim.

Detective Cody Barnes is initially inclined to believe that the crimes are pranks that were committed by the owner of a strip club who lives on the Terrace, but a week after the second break-in, a woman who lives on the Terrace is shot to death in her bed. As before, there are the balled-up sheets in the window, the Playboy magazine inside the sheets, and a message on the wall: The fatality game claims its first victim. More will be coming. Stay tuned. Remember: You may be next.

As the case unfolds, Cody’s personal life takes an unexpected turn. He’s engaged to be married, but his fiancé is a thousand miles away as she tends to her mother, who is dying of cancer. Meanwhile, Cody begins to become attracted to the victim of the second break-in on the Terrace—the ultra-beautiful Lucinda Kane who recently lost her husband in a car accident. Sparks flicker, and then one night, the sparks turn into a bonfire that complicates his life and threatens to compromise his engagement, his reputation, and his investigation.

Also complicating the investigation is Jonas Pickett, who lives at the far end of the Terrace with his mother. Now forty-two, Jonas is obviously suffering from some kind of mental disorder. He claims that at least three people on the Terrace are aliens and admits to walking around late at night and looking into the windows of those who live on the Terrace. He also claims to have been inside the victim’s house on the night she was murdered, but supposedly, his reason for being there was not to murder anyone but only to steal some food from the refrigerator.

Suddenly, there is a major break in the case—the victim’s computer is accessed, and a number of emails point to a person who lives on the Terrace. He is arrested and interrogated by Cody, and shortly after his interrogation, he is charged with murder. But then, two days later, a very key figure in the case disappears, and within twenty-four hours, his body is found in his car with two bullet wounds to his head. From here, everything unravels in a cascading torrent of violence that will leave two more people dead by cyanide poisoning, but it isn’t long before a number of clues begin to point towards a person that no one had ever suspected.
Download: epub mobi (Kindle) pdf more Online Reader
lrf pdb txt
Price: Free! USD
Add to Library
Create Widget
Tags: murder murder mystery sherlock holmes edgar allan poe agatha christie arthur conan doyle 99 cent book crime books fiction anthologies crime 99 cents
About Robert Trainor

I spend a great deal of time revising my books. After finishing the first draft, I go through the book at least eight more times--first page to last page. Each journey through the book is slow and painstaking--no less than three hours and no more than thirty-five pages a day. From my experience, the kind of errors that pop up on some of the later readings can be rather surprising, if not downright alarming! I particularly look for inaccurate punctuation, lackluster sentence structure, and inaccurate or repetitive vocabulary. I also do not permit confusing sentences to stand--I can't imagine that any reader will want to read a sentence twice because I couldn't find a way to explain myself clearly.
Finally, I would ask you all to keep an open mind about novels by an author who has no brand name. I am quite unusual because I do not advertise myself in any way, shape, or form (outside, I guess, of this little biography). My books are well-written, entertaining, and thought provoking, but they are often truly original, and I worry about the page-six syndrome. That's the point where some readers abandon a book by an unknown author because of a single sentence, idea, or attitude that seems amateurish to them. Have faith that there are some genuine diamonds in the Kindle arena and have faith that your instinct to buy one of my books was a good instinct. If you read any of my books to the finish, I think you'll feel that your time was not wasted because these novels are not cheap imitations--they are real creations.

You have subscribed to alerts for Robert Trainor.

You have been added to Robert Trainor's favorite list.

You can also sign-up to receive email notifications whenever Robert Trainor releases a new book.