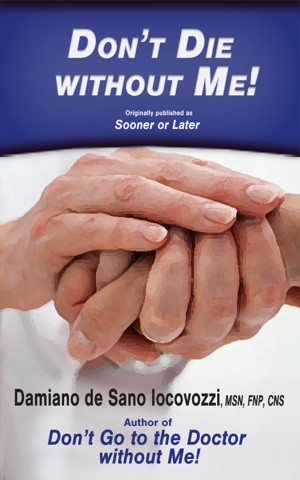 Don't Die without Me!

Damiano de Sano Iocovozzi, MSN FNP CNS is a world traveler, linguist and family nurse practitioner. From an early age, growing up in upstate New York, he was fascinated with languages, the spirit of giving and knowledge of other cultures and countries. Damiano completed years of language study and work in Italy, France and Germany. Later, he became a Peace Corps Volunteer and served in a small high school in Meknes, Morocco.
After the Peace Corps, Damiano traveled to San Francisco, California where he worked as an international tour director, leading organized tours around the world. However, Damiano found his true calling becoming a registered nurse and clinical nurse specialist upon earning his degree from the University of San Francisco. During the AIDS epidemic, he specialized in caring for the very sick on a local AIDS hospital floor.
Damiano completed a post-Master’s certificate as a family nurse practitioner from Samuel Merritt University where he worked as an instructor for nine years. He also worked as a clinical nurse specialist and educator for Summit Hospital in Oakland. He served veterans as a family nurse practitioner for a number of years in Vallejo, California. Damiano worked in a number of small clinics in primary care and cardiology in Palm Springs, California, where he currently lives. He is the author of "Sooner or Later: Restoring Sanity to Your End-of-Life Care" in a second printing as "Don’t Die Without Me" and the upcoming third release in the Sooner or Later trilogy, "Don’t Take Your Child to the Doctor without Me".

Reviews of Don't Die without Me! by Damiano de Sano Iocovozzi

You have subscribed to alerts for Damiano de Sano Iocovozzi.

Would you like to favorite Damiano de Sano Iocovozzi?

You have been added to Damiano de Sano Iocovozzi's favorite list.