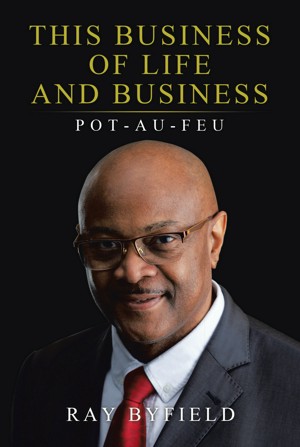 This Business of Life and Business: Pot-Au-Feu

By Ray Byfield
May we all embrace and help to fashion life's reality as it is intended to be, not for selfish or self-serving purposes, but with morality and spiritual depth, for the good of all humanity.
- Ray Byfield

This inspiring thought came to me amidst the backdrop of some tempestuous life experiences when I was trying to understand why my business and personal relationships seemed to have faltered. More
May we all embrace and help to fashion life's reality as it is intended to be, not for selfish or self-serving purposes, but with morality and spiritual depth, for the good of all humanity.
- Ray Byfield

This inspiring thought came to me amidst the backdrop of some tempestuous life experiences when I was trying to understand why my business and personal relationships seemed to have faltered.
Though my efforts bore all the hallmarks of success, it wasn't enough to hinder my rapid downward spiral from grace with family, friends, and myself, which plunged me into such abysmal realms that it nearly caused my death.
I had it all figured out. I was on a trajectory toward prominence in the hair and beauty industry, but my personal and business relationships devolved in a frightening manner which ultimately defiled all my good intentions and endeavors.
My relationships with 'Madam' and subsequently 'Vex' (not their real names) brought me to a place of servitude and drudgery. However, this caused me to dig deep into the depths of spirituality, and I formed a philosophical context which brought about a higher understanding of the inner workings of life, and of self.
And then there was Rob, my good friend who once worked in the upper echelons of the banking industry. Along with sound advice, he helped me to understand more about how life in the business world worked.
While wallowing in an abyss of darkness which was heightened by the loss of close friends and family, I became more aware about identifying with the pain of others, and through offering whatever means of encouragement I could, I quickly learned that I was capable of preventing them from falling off the edge of life the way I almost did.
Eventually I came to terms with the stark realization that my life experiences were not accidents, but growth experiences. My book offers useful tips on how to see this truth.
Within these pages you may find a business and life plan that will cost you only the price of a paperback book. Should anyone adopt any of these principles, then I will achieve great satisfaction in knowing I have made a positive impact in the world.
Please take a moment to leave a few words about this book at: raybyfieldauthor.com
Be sure to leave your email address, which will be entered into a lottery system, in order to select a participant who will qualify to receive a donation to their charity of choice. A foundation will be set up for the purpose of managing this charitable effort.
Available ebook formats: epub
Price: $6.99 USD
Buy Add to Library Give as a Gift
How gifting works
Create Widget
Tags: life purpose selfhelp book business intelligence business and life ray byfield
About Ray Byfield

Ray Byfield migrated to Canada from Jamaica in December 1999. Like countless others, he sought refuge from the effects of a global economic imbalance and a lack of opportunities for meaningful work in Jamaica.
Armed with a passion to seek better for his family and himself, he sought to make meaningful and earnest contributions toward community development and the economic wheel in Canada.
It became clear at an early stage that he would have had to adapt not only to extreme weather conditions, but to an economic climate, both locally and on a global scale, that was also frigid.
Weathering these economic challenges meant working several jobs at a time in order to survive. A recent tally revealed that Ray worked at 22 different companies on a full-time basis in Canada. In addition, he registered and operated 7 different businesses.
In Ray's words, "The act of survival itself is hard work. In my own businesses, whenever I could I hired neighbors and friends from my community, to 'help at home' and I also shared food and services with them to give them hope while we all worked together to create a stable community environment. This became our survival mechanism during the gloomy financial conditions that existed in North America at the time."
Now, having come through that time of his life, Ray's first book, This Business of Life and Business, reflects upon his life challenges and personal growth

Reviews of This Business of Life and Business: Pot-Au-Feu by Ray Byfield

You have subscribed to alerts for Ray Byfield.

You have been added to Ray Byfield's favorite list.

You can also sign-up to receive email notifications whenever Ray Byfield releases a new book.