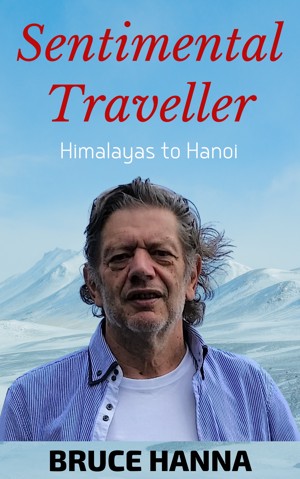 By Bruce Hanna
Sentimental Traveller follows the author from the optimism of the Age of Aquarius through decades of poetic travel, childlike curiosity and disconcerted wonder. It is woven from conversations and recurring relationships with streetwalkers, street hawkers, beggars and cripples, dreadlocked hashish-smoking holy-men, drug smugglers, rich tourists and travelling business folk. More
"A border-crossing, boundary-breaking story. Observant as Paul Theroux... as compassionate as Ryszard Kapuscinski... as politically astute as Anthony Bourdaine... and QUIRKY as hell."

The book follows the author from the optimism of the Age of Aquarius through decades of poetic travel, childlike curiosity and disconcerted wonder, in the company of women met along the way. The narrative is woven from conversations and recurring relationships with streetwalkers, street hawkers, beggars and cripples, dreadlocked hashish-smoking holy-men, drug smugglers, rich tourists and travelling business folk. The author is impressed by the simple well-meaning dignity of folk he meets at all levels, and he becomes absorbed in the stories they tell that illuminate the decadent essence and paradox of the human condition under the yoke of prosperity and progress.

The author’s journey begins in 1975 on a hippie-trail honeymoon in Asia with his indomitable, young wife. On a near fatal expedition to see Mount Everest, their escape from the high Himalayas is delayed by a plane crash. In following years, the author is obsessed with discovering a “definition of travelling” to guide him recapturing those haunting memories in his treasured notebooks. From the 20th to the 21st century, through country after country the notebooks fill, and the World changes dramatically, and so too does the author. Finally, as an old man he salvages from his notebooks in gripping detail the full story of the perilous mountain trek long ago, and the singing voices that miraculously saved him from violent doom.
Download: epub mobi (Kindle) pdf more Online Reader
lrf pdb txt
Price: Free! USD
Add to Library
Create Widget
Tags: vietnam street people cambodia himalayas meeting people travel in asia inequalities human progress politically astute
About Bruce Hanna

Born in Sydney, Australia in 1949, Bruce Hanna is the author of Fatal Moments (a novel, A&R, 1987) Empire of Exiles (A&R Poet of the Month, 1977), Hugh Janus (a novel, Smashwords, 2017) and Babu (a novel, Smashwords, 2017). His cartoons, poetry and other writings appeared in the Australian, the Bulletin, the Sydney Morning Herald, Nation Review and Tribune. He is responsible for the PsychoJunk Recordings (1999-2004), and edited the short-lived independent Adelaide newspaper Paper TV (1984). An opponent of the American War in Vietnam, Hanna was granted amnesty under the Whitlam government. He was Secretary of the Unemployed Workers’ Union SA and a founding member of the now defunct Environmentalists for Full Employment and the Industrial Democracy Association. He designed and conducted the Tangentyere Efficiency and Morale (TEAM) Project (Alice Springs, 1986) and subsequently worked as an advisor to legislative authorities, and senior mediator within the SA industrial training sphere (1987-2009). Since 1975 he has travelled extensively, writing in the Seychelles, the south of France and several Asian countries. He resides in Paradise, South Australia under supervision of two adult children.

You have subscribed to alerts for Bruce Hanna.

You have been added to Bruce Hanna's favorite list.

You can also sign-up to receive email notifications whenever Bruce Hanna releases a new book.