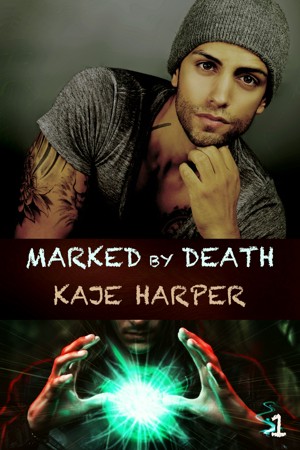 Rated 4.67/5 based on 3 reviews
Darien's hearing voices in his head, but the tattoos forming on his skin may mean he's not just going insane. He needs someone who can deal with ghosts. Necromancer Silas isn't crazy about being woken by a stranger demanding help, but even Grim, his cat-familiar, agrees— in a world of death and demons, protecting gorgeous, ghost-ridden Darien is Silas's next difficult job. More
Asking a necromancer for help is scary; falling for him may be downright terrifying.

Darien Green's afraid he's going insane. The voices in his head are getting louder, weirder, and more numerous. But tattoos appearing on his skin say that there might be a magical reason, something other than his own brain going around the bend. He's worked up the nerve to ask the local necromancer for help. Now he just has to survive his encounter with tall, dark, and talks-to-ghosts.

Necromancer Silas Thornwood doesn't appreciate being woken out of his bed by a stranger pounding on his door. But when that stranger turns out to be a half-frozen young man with an unexpected appeal, Silas can't turn him away. Even Grim, his cat-familiar, agrees— in a world of death and demons, protecting gorgeous, ghost-ridden Darien is Silas's next difficult job.
Download: epub mobi (Kindle) pdf more Online Reader
lrf pdb txt
Price: Free! USD
Add to Library
Create Widget
Tags: romance gay lgbt fantasy paranormal ghost necromancer
About Kaje Harper

I get asked about my name a lot. It's not something exotic, though. “Kaje” is pronounced just like “cage” – it’s an old nickname, and my pronouns are she/her/hers.

I was born in Montreal but I've lived for 30 years in Minnesota, where the two seasons are Snow-removal and Road-repair, where the mosquito is the state bird, and where winter can be breathtakingly beautiful. Minnesota’s a kind, quiet (if sometimes chilly) place and it’s home.

I’ve been writing far longer than I care to admit (*whispers – forty years*), mostly for my own entertainment, usually M/M romance (with added mystery, fantasy, historical, SciFi…) I also have a few Young Adult stories (some released under the pen name Kira Harp.)

My husband finally convinced me that after all the years of writing for fun, I really should submit something, somewhere. My first professionally published book, Life Lessons, came out from MLR Press in May 2011. I have a weakness for closeted cops with honest hearts, and teachers who speak their minds, and I had fun writing four novels and three freebie short stories in that series. I was delighted and encouraged by the reception Mac and Tony received.

I now have a good-sized backlist in ebooks and print, both free and professionally published, including Amazon bestseller "The Rebuilding Year" and Rainbow Award Best Mystery-Thriller "Tracefinder: Contact." A complete list with links can be found on my website "Books" page at https://kajeharper.wordpress.com/books/.

I'm always pleased to have readers find me online at:

About the Series: Necromancer

Necromancer Silas was content with his life alongside his cat-familiar Grim, until a young man he once cared about collapses on his doorstep, riddled with ghosts and full of arcane power.

Reviews of Marked by Death by Kaje Harper

'Marked by Death' is the first book in the ‘Necromancer’ series. It’s told in third person through the eyes of Darien Green, a young man who’s possessed by ghosts, and Silas Thornwood, a powerful necromancer.

Originally released by the author in weekly installments in her author’s group, 'Marked by Death' was supposed to be a one-off flash fiction. But so many people, including me, begged her to continue with this story, and here it is. I’m so glad she did, because I love the world and characters. I liked the story so much, I’ve read it three times so far, and I almost never re-read a book.

This book is set in an alternate 1960s era where magic lives side-by-side, but hidden, from the mundane world. Magic is considered something to laugh at or not taken seriously. Which is fine with the sorcerers and necromancers. In fact, they have people who work at making magic seem trivial.

The blurb gives a good idea of the beginning of the story and why Darien searches out a necromancer to rid him of the ghosts he carries. There are some issues between Darien and Silas, the necromancer, at first, but Darien really wants the ghosts gone. He’s losing his mind.

All the characters are terrific and have distinct personalities. Darien is twenty-one, impulsive, impatient, outspoken, a bit brash, and has powerful magic, even if he doesn’t know how to control it yet. Silas is over thirty, cautious, intelligent and powerful. He’s attracted to Darien, but sex between men is still considered a crime, and he doesn’t want to endanger either of them if they are caught. Darien on the other hand has other ideas. Grim is Silas’s sarcastic, wise, and visionary familiar. Grim helps lighten the story when it starts getting too dark. I had no trouble in believing in Darien and Silas as a couple.

As I mentioned, I really enjoyed the world the author created as she wove magic into everyday 1960s living. Normally, I don’t like stories set in the not too distant past, but this book was filled with magic. I’m a weakling when it comes to dark or spooky stories, and this had demons and ghosts. However, I was able to get through it, but not without taking breaks. I’m sure it won’t bother most readers. Two of my most favorite parts of the story was how Darien helped Silas during the battle and also after the battle as they headed home.

I’m looking forward to when 'Powered by Ghosts', the next book in the series, comes out. In the meantime, I highly recommend 'Marked by Death' and give it a solid 5 Stars.

Sometimes, protecting people does more harm than good. When Silas way to concealment word over young Darien to protect his magic from demons, he also protected him from other wizards. Damien never got the training he needed so when ghosts came knocking, he had no defenses. Thankfully, fate brought them together again.

The world building, Magic in the 1960s, is intriguing… If a little bit startling. For some reason Austin Powers with magical abilities just doesn’t seem like a good idea. Thankfully, there isn’t too much silliness in this book. It’s actually pretty serious and straightforward. There’s a lovely sexual tension between the two main characters, but no explicit sex. This story has a satisfactory resolution, and I’m excited to read how their story goes on in the next edition of the series.

Perfect blend of romance and sorcery, set in an alternative 1960s where magic is part of society. Wonderfully entertaing and I could vividly see it adapted to mini tv series format. The scenes came across with unusual visual clarity and with a very well paced action beat to them.

The romance was lovely too, both characters had a nice warmth to them as well as between them. Happy sigh! If I could have turned up the UST a tiny bit more, the book would have been my kind of perfect. But by no means did it take away or diminish my enjoyment of the story.

The magic worked so well it banished my month long reading slump, and the only bad thing is I want more right now. I'll definitely read the sequel as soon as it's released.

You have subscribed to alerts for Kaje Harper.

You have been added to Kaje Harper's favorite list.

You can also sign-up to receive email notifications whenever Kaje Harper releases a new book.