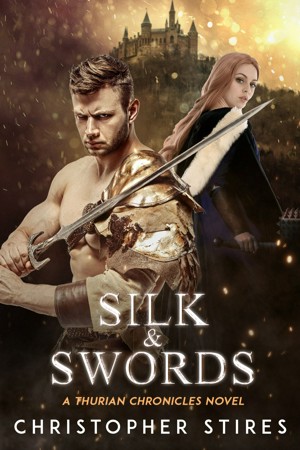 Three entwined tales of love and eroticism, set in the passionate world of Thuria…tales woven together for the titillation of a powerful, meddling, yet well-meaning queen by a wise, unsettling, sooth-saying oracle. More
For the passionate pleasure of the Queen…

An alluring young woman damned with a curse challenges the heartless assassin commanded to kill her.

A bereft widow discovers the delights of the marriage bed with a ferocious knight-soldier.

A sensuous female barbarian and her ardent diplomat husband investigate the mysterious murder of a masked prisoner.

Three entwined tales of love and eroticism…tales woven together for the titillation of a powerful, meddling, yet well-meaning queen by a wise, unsettling, sooth-saying oracle.

Christopher Stires has five novels currently in print—Paladin’s Journey, Rebel Nation, Dark Legend, and The Inheritance (Winner of the 2003 Dream Realm Award for Horror) are available from Zumaya Publications. Paladin’s Journey: Sabian (the sequel to Paladin’s Journey) will soon be released by Zumaya. Starbeasts (a reprint/retitle of To The Mountain Of The Beast) has been released by World Castle Publishing. He has had more than 70 short stories and articles appear in publications in the United States, Argentina, Australia, Belgium, Finland, France, Greece, the Netherlands, and the United Kingdom. He is a member of Facebook, Goodreads, and several book/writers groups.

About the Series: The Thurian Chronicles

Also in Series: The Thurian Chronicles

You have subscribed to Smashwords Alerts new release notifications for Christopher Stires.

You have been added to Christopher Stires's favorite list.

You can also sign-up to receive email notifications whenever Christopher Stires releases a new book.