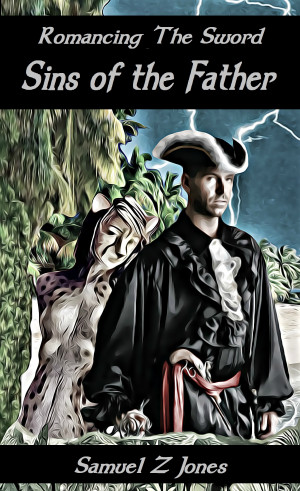 Romancing The Sword Book III - Sins of the Father

By Samuel Z Jones
Rated 4.00/5 based on 1 reviews
Montesinos DeSilva has found his father, but civil war still threatens Daricia.

From the island of Far Hrinor in the deepest south, Queen Saban of Daricia must return, with the legendary swordsman DeKellia and his errant son in tow.

But the hostile expanse of Heimjaro lies in their way, and the queen has already stirred up its inhabitants to war against her... More
Montesinos DeSilva has found his father, but civil war still threatens Daricia.

From the island of Far Hrinor in the deepest south, Queen Saban of Daricia must return, with the legendary swordsman DeKellia and his errant son in tow.

But the hostile expanse of Heimjaro lies in their way, and the queen has already stirred up its inhabitants to war against her.

While DeKellia and the queen make their way home, the Naril warlock Rathelon still pursues his master's plans; to prevent the queen's return and ensure the overthrow of the Darian throne.

About the Series: Romancing The Sword

Also in Series: Romancing The Sword

About the Series: The Complete Akurite Empire - Running Order

The full saga, in chronological order, from Sabra's teenage years in Romancing The Sword, through Her young adulthood as a rebel knight in the war against the Kellion Empire, and into Her deification during the reign of the Lord Protector.

Also covering the the continent-spanning love affair of Montesinos DeSilva and Sorcha Kavnor, the rise and fall of Silveneir, and the growth of the Women's Regiment into the most powerful armed force in the land. 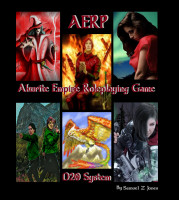 Samuel Z. Jones is the author to Romancing The Sword Book 3 Sins of the Father. Mr Jones definitely has a great imagination and a good voice in his story telling. It is also evident from this book that the guy has played video games which is something I mean as a compliment. The book was a good one and I am definitely intrigued to read the next.

In the book DeSilva has finally found his father, Montesinos DeKellia. It is a somewhat touching reunion. Anyway, they are in the land of Hrinor where everything is a form of narcotic. That was interesting to me. Still, even though they are in Far Hrinor where everyone is at peace and there is no wars, probably because everyone is always stoned and way too happy-yay for Utopia!-DeSilva has to leave with DeKellia and the crew.

Daricia is still in civil war and and the Queen Rathe has proven she is insane. I have a feeling I know who Kam Dashien might be but I won’t let on. I want to see if Sabra ever gets the armor removed though I find it ironic that she is clad in armor in this quintet so far that she wants to desperately get out of, and yet in the Akurite Empire trilogy she dons the armor she wears proudly.

The action scenes were intense and I enjoyed them. Sometimes it reminded me of playing video games. That was an interesting moment to be drawn into nostalgia. I actually pictured two of the battle scenes in this book as if I was playing a Final Fantasy video game. It was pretty cool, I must say.

I rate Book 3 of Romancing The Sword Sins of the Father by Samuel Z. Jones and 8 out of 10. Please pick up the book today! You are guaranteed to be entertained! Make sure you start with the first book in the quintet though. There is more to this book as well, but like always you will just have to read it for yourself. It is worth every penny.

You have subscribed to alerts for Samuel Z Jones.

You have been added to Samuel Z Jones's favorite list.

You can also sign-up to receive email notifications whenever Samuel Z Jones releases a new book.