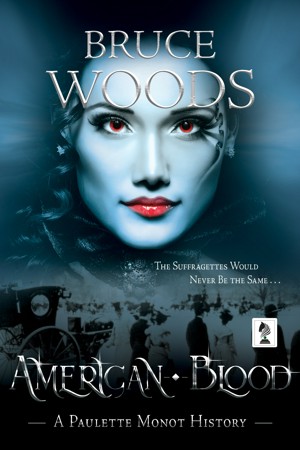 Bruce Woods is a professional writer/editor with more than 30 years in magazine publishing, having worked as editor of Mother Earth News and Alaska Magazine, among others, and has published both nonfiction and poetry books. Prairie Schooner magazine featured his work in its “Writing from Alaska” issue. His Birdhouse Book, brought out by Sterling/Lark, is still in print and has sold more than 100,000 copies.
After leaving the editor’s position at Alaska Magazine in late 1998, Woods began a second career in External Affairs for the Alaska Region of the U.S. Fish and Wildlife Service. Eventually serving as the de facto writer/editor for the agency’s largest region, as well as providing information and an initial contact point for state, national, and international media on topics affecting Alaska’s often controversial wildlife and land management issues, Woods retired in the spring of 2013 in order to focus on fiction writing.
His Hearts of Darkness trilogy, the first two volumes of which, Royal Blood and Dragon Blood, are scheduled for publication by Penmore Press in 2019.
In addition to the Birdhouse Book referenced above, Woods has published three nonfiction volumes and several books of poetry with small presses. During his magazine editing career he also served as editor/contributor to numerous nonfiction volumes. Several of his essays have been anthologized, as well.
Woods currently lives in Anchorage, Alaska with his wife Mary and his two cats, Lucy Fur and Boswell. Gardening and bicycling (the latter usually upon a single-speed road bike named “Yellow Snow” that he built from an old track frame bought online) are chief among his many interests outside of reading and writing. He has two children, Ethan, who studied music composition at Bennington College and now resides in Asheville, N.C., and his daughter Alice, who recently graduated from Minneapolis College of Art and Design and currently lives in Minneapolis.

You have subscribed to alerts for Bruce Woods.

You have been added to Bruce Woods's favorite list.

You can also sign-up to receive email notifications whenever Bruce Woods releases a new book.