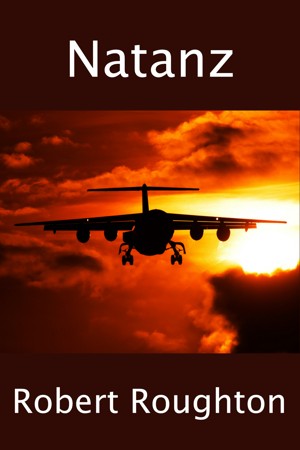 "Natanz” is a fast-paced story, involving cockpit power-plays, engine failures, near misses, love, lust, and current international intrigue. More
Tom is a skilled executive jet pilot working for an obnoxious boss. When threatened with the sack for cancelling a charter when the senior pilot freezes during a near miss, almost killing them all, he resigns and purchases a struggling charter company.

Sinking all he has into the venture, he struggles to build the company, while his relationship with his cabin attendant girlfriend is falling apart.

When Tom foils an attempt on the life of one of his new customers, saving his crippled plane from an on-board explosion and seemingly unrecoverable loss of control, he becomes the target of the would-be assassin.

Recovering from the attempt on his life, he is approached by the CIA to fly a defecting scientist from Iran under the guise of a charter flight.

Against his better judgement he accepts the mission and transfers to England for intensive low level flight training at the Mac Loop. Surviving an engine failure and crash, he re-evaluates his commitment to the mission.

Deciding to continue with the mission, he flies into Iran. On the flight out, he declares an emergency, and drops below radar height, landing at night on a country road to affect the pick up of the defecting scientist and his family.

For the next three hours, he must fly at low level, avoiding searching aircraft.

Discovered, and fired upon, his aircraft is badly damaged and crashes in Saudi Arabia. Tom is trapped in the burning wreck, convinced he is about to die.

Drifting in and out of semi-consciousness he is aware of the medical team fighting to save his life.

Recovering sufficiently to leave hospital, he returns Stateside and begins a long and painful struggle to fully recover and fly again.

You have subscribed to alerts for Robert Roughton.