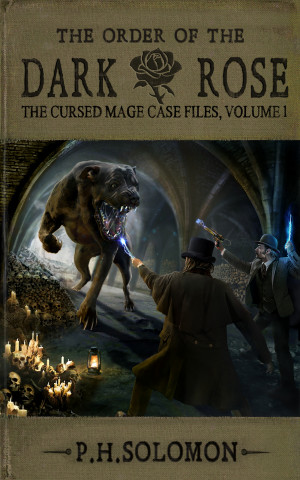 The Order of the Dark Rose

The Gallantean Empire relies increasingly upon magical technology which cleans sewers, runs trams and much more. Within the capital city of Cal Rindon, magic is pervasive, but not necessarily used without crime involved. The bustling metropolis boasts constant innovations mixed with growing pains. Amid the good lurks the bad with unrest and growing crime.

Arch-mage Manny Mandeheim fell under a curse, watched his fiancé die, and then lost his job as a spy. So what's an arch-mage to do? Start his own magical investigation service while he works to clear his good name and maybe avenge his lost love. With his very un-magical partner, Wish Ackford, Manny discovers the menace of a much larger conspiracy than he expected looming behind his curse. Suddenly, the limitations from the hex leave him at a distinct disadvantage as he and Wish investigate.

Assassins lurk at every corner or in every tram car. The threat of an unknown mastermind with murky intentions lingers just out of sight. A questionable source offers the hint of a secret order hounding Manny's footsteps. A murder leads to wrenching discoveries.

Nothing an arch-mage can't handle...

Unless the curse limits how much magic he can use or kills him outright.

A mixture of Sherlock Holmes and Harry Potter, The Order of the Dark Rose is set in an alternate fantasy world where magic is both commonplace and dangerous. Mysteries abound in this original, new fantasy from P. H. Solomon, author of the award-winning, best-selling epic fantasy series, The Bow of Hart Saga.

Can Manny survive long enough to break his curse? Or will the arch-mage's hidden foe escape him?

P. H. Solomon lives in the greater Birmingham, AL area where he strongly dislikes yard work and sanding the deck rail. However, he performs these duties to maintain a nice home for his loved ones as well as the family’s German Shepherds. In his spare time, P. H. rides herd as a Computer Whisperer on large computers called servers (harmonica not required). Additionally, he enjoys reading, running, most sports and fantasy football. Having a degree in Anthropology, he also has a wide array of more “serious” interests in addition to working regularly to hone his writing. His first novel, The Bow of Destiny was named 2016 Book of the Year by Fantasia Reviews and is the first book of The Bow of Hart Saga. The sequel novel, An Arrow Against the Wind, was released in April of 2017. The third book of the series, The White Arrow, is due to be released during the Fall of 2017. P. H. Solomon also authored the award winning short story, The Black Bag, which won best published short story at SCWC 2012. P. H. is also a member of Science Fiction and Fantasy Writers of America (SFWA). 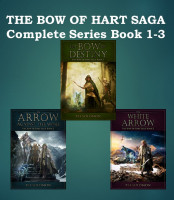 You have subscribed to alerts for P. H. Solomon.

You have been added to P. H. Solomon's favorite list.

You can also sign-up to receive email notifications whenever P. H. Solomon releases a new book.