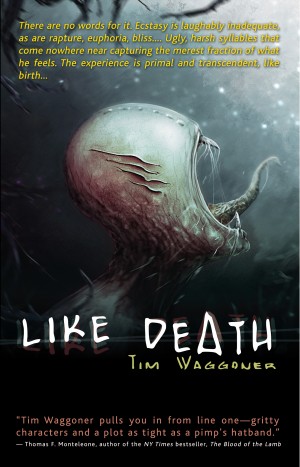 Scott Raymond lost his parents in a bloodbath when he was only nine years old, but despite the occasional headaches and hallucinations, he's managed to turn that trauma into moderate success as a true crime writer. The success doesn't extend to keeping up the relationship with his estranged wife and son, however. Hoping to regain a sense of normal family life, he follows them to Ash Creek, Ohio under the pretense of writing a new book about a missing six-year-old girl.

There, he encounters a young woman who shares the missing girl's name. She leads Scott into a world of psychotropic spiders, shark-toothed teenagers and the expression of nearly every dark desire. Fear and fascination lay equal claim as the nightmare fantasies of this realm bleed into Scott’s daily life and his attempts to maintain a relationship with his son.

Soon, he will need to use this world of cruelty and pain to face his past, his future, and what his life might have become. If he fails, it is only a matter of time before the nightmare that bloodied his childhood will reach out to ensnare his own son.

Tim Waggoner’s novels include the Nekropolis series of urban fantasies and the Ghost Trackers series written in collaboration with Jason Hawes and Grant Wilson of the Ghost Hunters television show. In total, he’s published over twenty novels and two short story collections, and his articles on writing have appeared in Writer’s Digest and Writers’ Journal, among other publications. He teaches creative writing at Sinclair Community College and in Seton Hill University’s Master of Fine Arts in Writing Popular Fiction program. Visit him on the web at www.timwaggoner.com.

I've read Waggoner's work before, and saw a touch of those other books in this one, albeit just a touch. This is good as too much would have taken the heavy feel of this book and turned it to a far lighter side.

'Like Death' is a wonderfully written novel that captures a very dark feel and wraps it around your soul, leaving you feeling dirty and sullied at major points in the story. From the intro of the tale to the very final word, the reader is treated to a tale that brings out horror as well as the darkness that dwells in all of us. Waggoner's concept of the darkness is an interesting and creative idea. Though it is in this presentation that you see a hint to some of his other works, Waggoner keeps it darker, and in doing so saves the work. He also doesn't go all out and extravagant, thus over doing the setting. Instead, it's the right balance of the disturbing and weird.

The characters in 'Like Death' are also well written, and realistic. There were a couple points where the main character Scott seems a bit off, but throughout the story you slowly understand what is going on and in the end everything is explained. The young woman he meets is an excellent character, and easily my favorite out of all of those present in the tale. As you learn more about her, her character deepens and she becomes a very rounded character.

The storyline travels along with very few dry spots, moving from one event to another and posing enough of a mystery to keep the reader interested. As I read, I found myself striving for what came next, searching for the pieces to figure out what was going on as the plot advanced. There were points where I thought I had everything together, and then found out that either I was right, but often found out I had it wrong. That kept me reading more so, as I wanted to finally figure what was going on.

In the end, this is an amazing book that is the right amount of gore mixed with horror and the weird. There are parts that will linger with me in the months to come, perhaps longer. The mysteries all got solved, the way things ended were not the way I would have liked, but still left me feeling better about how everything came together. Scott's own ending made me smile and though things came together in an unusual manner, it still worked really well with the storyline.

You have subscribed to alerts for Tim Waggoner.

You have been added to Tim Waggoner's favorite list.

You can also sign-up to receive email notifications whenever Tim Waggoner releases a new book.