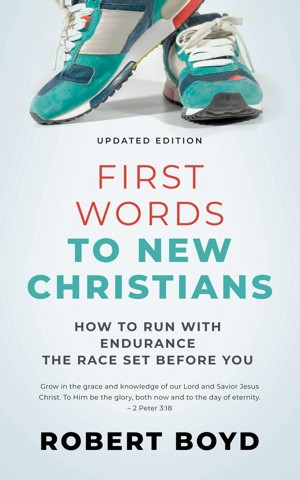 First Words to New Christians: How to Run with Endurance the Race Set before You

By Robert Boyd
This helpful book provides practical, biblical guidance and encouragement for new Christians. More
Now what?
Now that you are a Christian, it becomes a most important question: What kind of a Christian are you going to be? Are you going to be one modeled after people’s opinions, or will you follow after the Bible standard? Will you be a Christian, as defined by scripture?

Robert Boyd was born on August 24, 1816, in Girvan, South Ayrshire, Scotland. When Robert was about fifteen years old, he went to hear a preacher who was plain and direct in his preaching, and it was then that Robert gave his heart and life to Jesus Christ. On April 6, 1840, Robert Boyd married Christina Forbes. Robert and Christina had nine daughters, one of whom died in infancy in Scotland. Upon moving to Montreal, Canada in 1843, Boyd began preaching, and later moved with his family to the U.S.A. Robert Boyd died at the end of August 1879, but his words live on.

You have subscribed to alerts for Robert Boyd.

You have been added to Robert Boyd's favorite list.

You can also sign-up to receive email notifications whenever Robert Boyd releases a new book.