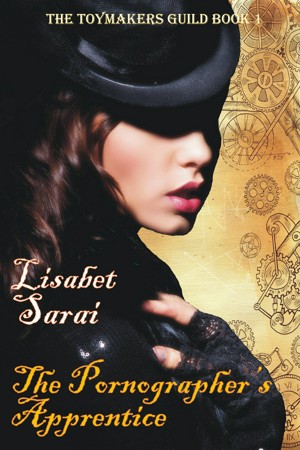 She wants to build sex toys... if they'll let her.

If you like steam punk erotica with a kinky feminist bent, you'll love The Pornographer's Apprentice. More
She wants to build sex toys... if they'll let her.

Inspired by a salacious catalogue found in her deceased uncle’s library, she applies for an apprenticeship with the Toymakers Guild. The Guild fabricates bespoke sexual artifacts for the private pleasure of select clients – an occupation for which Gillian, with her technical abilities and her lascivious temperament, is eminently suited.

When an unscrupulous nobleman sets up a competing enterprise, he threatens not only the livelihood of the Guild’s members but their lives as well. Gillian hatches an audacious plan to entrap the villain, save the Guild, and leave the absent Master no choice but to grant her heart’s desire.

Reviews of The Pornographer's Apprentice: The Toymakers Guild Book 1 by Lisabet Sarai

Some of Ms. Sarai's books are replete with well-developed stories, as well as her trademark steamy sex scenes. Others have less story, more sex. This is one of the former. The story itself is a ripping good yarn. It introduces the reader to a fascinating alternate steampunk time--the mysterious underworld of the creating, testing, and delivering of complicated sex toys to rich clients in Victorian England, when even a hint of homosexuality could ruin a man's reputation, and women were expected to be chaste.

Gillian Smith is an orphan whose parents made sure she had mad skills in engineering and math--something all good parents should do, even today. After their deaths, while she's being housed by relatives, she discovers the secret library of her uncle, and finds in it a lush, inviting catalogue that shows and explains some of the sex toys produced by The Toymaker's Guild of Randerley Hall. At the ripe old age of 19, she runs away to offer her services to the establishment that could produce such interesting artifacts, and offer her freedom from the sexual strictures of the day.

When no one answers the front door of Randerley Hall, she enters their world by figuring out what the numerical pass code must be, once she realizes that the picture of the nautilus on the plate next to the door handle, contains a Fibonacci spiral, (what? LOL.) Once in the door, she's fascinated by paintings on the wall next to the stairs, that depict licentious scenes beyond her imagination. She's accosted by two young men who are apprentices, who are gobsmacked not only by her ability to guess the pass code, but by her sensual beauty. Then she meets the woman who is running the place while The Master Toymaker is away. Mrs. Featherstone is a formidable woman, who accepts her as an apprentice in the Toymaker's Guild for the short term, telling her that once the master returns, he will make the final decision.

Of course, as the only female apprentice, Gillian, or Jill to her friends, is expected to test out the equipment they design to be sure it meets the specifications desired by the customers. Each item is even more imaginative than the last one. The last time I read of such things was in Ms. Sarai's other steampunk novel, Rajasthani Moon, which is one of my favorites of her books. And while trying out the devices, our intrepid engineer also has frequent and varied sexual encounters with most of the other inhabitants at Randerley Hall. As the blurb states, there are few couplings or triplings or more, that are not enjoyed by Jill, as she proves her worth to the Guild again and again...and again.

There are many more plot points, but I don't want to spoil your enjoyment of this book. It has varied and steamy sex scenes that will take your breath away, a plucky heroine who doesn't always come out on top (ahem), but who always prevails in her quest to be accepted as a Toymaker. And while there isn't a cliff-hanger, there are definitely things introduced at the end of the book that point to another book or two in this exciting new series by Lisabet Sarai. I'm already looking forward to the next book!