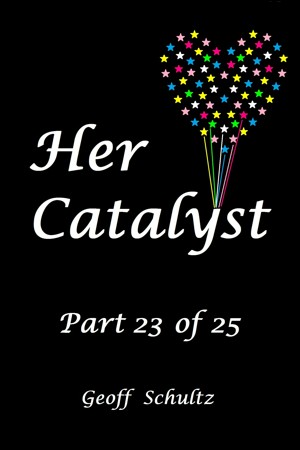 Rebeka almost chokes on her drink as she hears that. While she’s trying to regain her breathing, Angelisa asks for her, “Why would people ask that after what men did to her? It took her long enough to just be able to hug a safe old teddy bear like George. . . . When I was young, I made a vow that I wouldn’t let a man touch me who wasn’t as gentle and as caring as my Papa was. That really upset Mama because she knew there wasn’t anyone else in the culture who could hold a candle to Papa. I know Sharlene made a big deal out of not wanting to start a relationship with any man until she felt she could totally trust him and be comfortable with him.”

“Good for you, Angelisa, but very few women make those sorts of conscious decisions and fewer yet stick to them when they’re feeling a little lonely and some pretty boy gives them some attention.”

Rebeka is able to rejoin the conversation and says, “Even to encourage those sorts of logical decisions isn’t enough because I’ve seen girls with stars in their eyes claim they totally trusted a man when everyone else knew he was a slime ball.”

Sharlene suggests, “Some of the better emoters have posted on the Emotique online site some of their own suggestions of what qualities to look for in an intimate partner. They may not be applicable to the situations of other people, but it might give them some ideas to think about.”

“That might be helpful for some people, but as I’ve thought back over my own life and the bad decisions I made, I’m inclined to tell young women to forget about finding a man and to do what they need to do to take care of themselves. Maybe it was important years ago for a woman to find a man to take care of her, but with many more jobs open to women and the Emotique recordings to help with the, um, more personal sides of a relationship, there’s not as much reason for a woman to submit herself to a man and the risks that involves.”

“What? I’m glad you’re happy with Paul and I’m thrilled Sharlene wants to be in a relationship with me, but does she need me as a man to take care of her? No. She could be quite successful on her own and as safe as she insists she is with me, she would be safer without me, particularly at the start of our relationship when she didn’t know me. Yes, all relationships have risks, but why should the woman bear the brunt of those risks?

“If a man is abusive, few women are able to adequately defend themselves. If the woman relies on the man to support her and he leaves her for whatever reason, what happens to her? If she ends up pregnant and he isn’t interested in raising kids, she’s stuck. Rebeka is right, encourage the young women to take care of themselves and when they can confidently stand on their own two feet, if she happens to develop a friendship with a man and they mutually agree to form more of a relationship, then more power to them.”

Paula admits, “Okay, that may be the ideal, but how many will be able to reach it?”

George agrees, “Maybe not many, but without a goal, how many will even start out on a reasonable path? Nobody can stop people from making their own mistakes or even from suffering from the mistakes and illnesses of others, but the idea of encouraging young women to take care of themselves may reach a few who can encourage others and, hopefully, over time, more women will be able to lead safer lives. Maybe at the same time, some young men will learn to treat women with respect and help stop the cycle of abuse committed against women.”
Available ebook formats: epub mobi pdf lrf pdb txt html
First 20% Sample: epub mobi (Kindle) lrf more Online Reader
pdb
You set the price! USD
Buy Add to Library Give as a Gift
How gifting works
Create Widget
Tags: love story alternate timeline
About Geoff Schultz

After decades of doing office work from which he escaped to read books and occasionally write something in the evenings or on the weekends, this writer was finally able to retire and moved back to the dry heat land of saguaros, Gila monsters, and bark scorpions (while they can be a low maintenance pet, they are not amenable to leash training).

In spite of the typical reactions to this writer’s stories, it is hoped that some one some where will read them and might find a small value in them and be inspired to either chuckle, smile, or consider an idea which is new to them. To encourage that possible outcome which might briefly brighten someone’s life, this writer’s stories are being offered to the reader to enjoy for free (click "Buy" and offer $0.00). Hopefully, you’ll find that you are receiving more than you paid for them. If you like a story, please consider sharing a donation with the writer by buying another copy (for more than $0.00) and giving it to a friend.

In regards to the stories which Glynn Glenn requested this writer rewrite and release under his own name, or inspired him to write (such as The FIRST Attitude), many of them are what Glynn Glenn has described as ‘love stories’. Although some of those stories contain detailed descriptions of intimate activities between consenting adults, they are not intended to arouse the reader as is the intent with erotic stories. Indeed, those who typically like to read erotica will probably be disappointed with love stories. Instead, Glynn Glenn attempted to encourage people to treat their current or future intimate partner with gentle respect instead of acting like animals which are driven by their hormones to breed. The stories will also hopefully encourage people to take a more gentle and usually a more gradual approach to intimacy than most people would be inclined to consider. In that sense, Glynn Glenn’s longest love story might be viewed as a guide which provides a step by step process (in a more readable story format) for people to possibly follow as they gently expand their interaction from sharing physical affection in the form of hugs and kisses to sharing intimate pleasure (described in Her Catalyst as a journey of touching). Those people who are interested in reading romance stories (where, after experiencing several lovers, the characters finally believe they’ve found Mr./Ms. Right) will most likely be disappointed with Glynn Glenn’s love stories even though the category of ‘romance’ is probably the most appropriate. In contrast, love stories, as least as Glynn Glenn has described them, are stories where two consenting adults either develop or already have a friendship which is based on acceptance, respect, trust, and care and the story describes how they grow closer together as people and eventually mutually share the pleasure of full intimacy.

You have subscribed to alerts for Geoff Schultz.

You have been added to Geoff Schultz's favorite list.

You can also sign-up to receive email notifications whenever Geoff Schultz releases a new book.