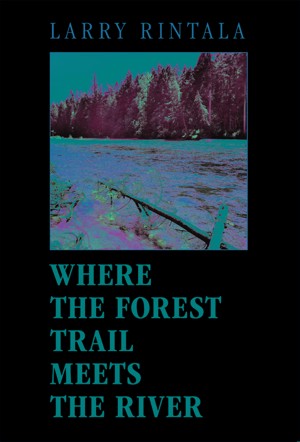 Where The Forest Trail Meets The River

For his stories, Larry Rintala draws on vivid memories of growing up in the home that overlooked the family farm ‘where the forest trail meets the river’. The Petersons were the first of his family to settle on Thatcher Road in the South Wellington District outside of Nanaimo on Vancouver Island. Their daughter, Aili, married Arv Rintala who began farming there in about 1936. He raised beef and dairy cows, and horses to plow fields and clear land. Larry spent many of his early days following his widowed Grandpa Rintala around the farm. Larry is now the fourth generation of his family to live there.

Since Larry is younger than his two brothers by five and ten years, he tells of roaming the surrounding forests and fields accompanied only by his faithful dog. Until he started school, he was often cared for by his grandparents, helping with the farm chores while his parents were at work. His father was employed at the Harmac pulp mill near Nanaimo but spent weekends and holidays logging and blasting, which made for some exciting events in Larry’s young life. His mother worked as a meat wrapper at the Overwaitea store on Gordon Street in Nanaimo and later as a female guard, or matron, at the Nanaimo RCMP’s city jail cells. In his stories Larry recalls not only the simple moments such as watching TV with his brothers, helping his mom in the home and the garden, working with his dad in the garage and around the farm, but also the excitement of confrontations with the cows and the power of the river. Trips to the local Buckerfields store, and to the shops in Nanaimo, were also adventures for a young Larry. He tells of finding relief from the heat of summer days at the Nanaimo River with his mom, and the story would not be complete without tales of fishing on the ocean with his dad during vacation time.

The ‘old’ South Wellington School is where Larry began his formal education. He shares how exciting it was to watch the construction of the ‘new’ school where he continued through to grade seven. When he finished high school at the rural Cedar Secondary, Larry began working in the drywall industry. Except for a one year stint as a faller and a skidder operator, he has continued in that profession and has run his own business, Harbour City Drywall, for over twenty-five years.

In 1980 Larry married a girl from Yellow Point. For a while they lived in the community of Extension, between South Wellington and Nanaimo. However, in 1993 they moved back to Thatcher Road, once again in view of the family farm. Friendly and sociable, Larry has always taken an active role in community life. He participated on a committee to organize the fire department in Extension and became one of the volunteer firemen. He also served as a trustee for both the Extension and South Wellington Fire Departments.

For ten years Larry participated in a Toastmasters International club in Nanaimo. He entertained the members with snippets of his stories as he worked towards and achieved the Competent Toastmaster (CTM) designation. Eventually he began recording his stories of growing up on Thatcher Road. He continued to work on them sporadically for several years, finally publishing Where the Forest Trail Meets the River in 2011.

Never one to let grass grow underfoot, Larry continues to run his drywall business, and on weekends operates a portable sawmill, skid steer and excavator. For the past five years, he has attended Spanish language classes in the evenings, “just for fun”. In his spare time Larry compiles recipes for a redneck cookbook. He is also working on a sequel to Where the Forest Trail Meets the River, which extends the story into his teenage years.

You have subscribed to alerts for Larry Rintala.

You have been added to Larry Rintala's favorite list.

You can also sign-up to receive email notifications whenever Larry Rintala releases a new book.