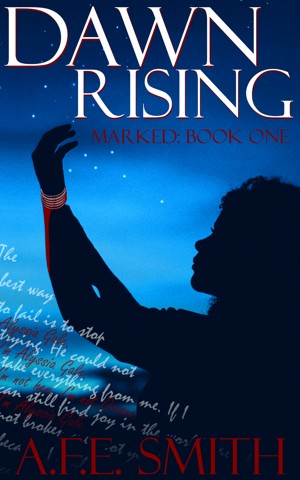 By A.F.E. Smith
Ever since she can remember, Alyssia has seen things: flashes of other people's lives in a world that's not her own. She's always believed they're just her imagination, a way to fill the void left by the accident that killed her parents and took her memories. Yet when she wakes up inside one of her own visions, she's forced to confront the fact that maybe she was seeing the truth all along. More
Alyssia Gale is a daydreamer. A liar. An attention seeker. Everyone she's ever known has found a label to stick on her, but one thing's for sure: she can't be telling the truth. The flashes she sees of the dark and difficult lives of four other people, living in a world that's not her own … they can't be real. Alyssia understands that as well as anyone, even if she does keep catching herself thinking of the people she sees as friends.

Then she's pulled into that other world by blood and dark magic, and realises that everyone she's ever known was wrong.

To start with, her focus is on surviving until she can find a way home. Yet it doesn't take long for her to figure out that where before she was merely a spectator, now she can change things. And with one of her friends being forced into an abusive marriage, and another trapped in the cruellest of prisons, there's plenty that needs changing. She just needs to survive long enough to do it.

What she doesn't know is that something connects her to these four people. Something she never could have imagined. And it's not long before she isn't just fighting to find her place between the worlds – she's fighting to protect her closest friends from a narrative that wants them dead.
Available ebook formats: epub mobi lrf pdb html
First 20% Sample: epub mobi (Kindle) lrf more Online Reader
pdb
Price: $3.99 USD
Buy Add to Library Give as a Gift
How gifting works
Create Widget
Tags: thought provoking female friendships strong female lead portal fantasy ya epic
About A.F.E. Smith

A.F.E. Smith is an editor of academic non-fiction by day and a fantasy writer by night. She is the author of the Marked series for young adult readers, and the Darkhaven fantasy novels for adults.

About the Series: Marked

When Alyssia Gale comes face to face with the people she's always thought of as imaginary friends, it's the start of an epic journey that will gradually lead her to unravel everything she understands about herself and the world. And behind every discovery, there is a deeper truth waiting to unfold.

You have subscribed to alerts for A.F.E. Smith.

You have been added to A.F.E. Smith's favorite list.

You can also sign-up to receive email notifications whenever A.F.E. Smith releases a new book.