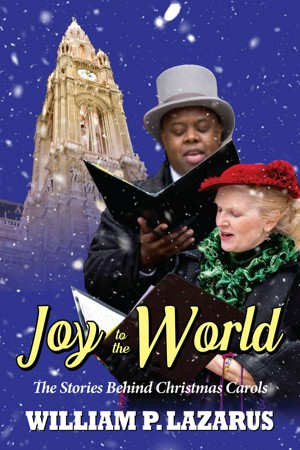 Joy to the World: The Stories Behind Christmas Carols

Around the age of seven, Bill Lazarus decided to become a writer. He has never deviated from that career choice. He worked on junior high and high school newspapers before majoring in journalism at Kent State (OH) University. As an undergraduate, Bill served as editor of his college newspaper as well as college correspondent for the New York Times. After obtaining his Master’s Degree in journalism from Kent State, he began a career that included writing for daily Connecticut and Florida newspapers.
He branched out to other media, writing race programs for NASCAR, producing radio scripts and serving as editor of a regional magazine. Along the way, he won numerous writing awards, including two international prizes for programs and was named Florida Feature Writer of the Year. In addition, Bill is a religious historian. He has spoken on the topic before numerous civic groups and religious organizations, and appeared on radio and television. He has written 14 books on religious history, including Comparative Religion for Dummies and published multiple novels and nonfiction books. A native of Portland, ME, Bill now teaches writing at Daytona State (FL) College and lives in Daytona Beach with his wife, Kathleen.

You have subscribed to alerts for William P. Lazarus.

You have been added to William P. Lazarus's favorite list.

You can also sign-up to receive email notifications whenever William P. Lazarus releases a new book.