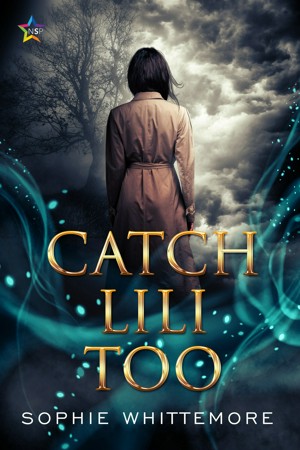 By Sophie Whittemore
Rated 5.00/5 based on 1 review
An immortal detective is after a killer targeting both the living and the undead. More
Lili is a Mesopotamian siren, and life as an immortal being is hard enough as it is. She’s asexual (which is incredibly difficult to reconcile if your entire point as a mythical being is to seduce people to death). She’s also struggling with depression from being alive for so long.

Lili is an absolutely shoddy improv-detective trying to track down a serial killer so ruthless that it makes even her murderous soul uneasy. However, there’s something larger at work than just one serial killer. A small town is hiding an even deadlier, global-scale secret. Forget Area 51 conspiracies. This one beats them all. With magic.

So, what better way to spice up her eternal life than being hired as a vigilante detective to stop a serial killer? Anything, literally anything. She’d trade her left lung to get out of this. Or, perhaps, somebody else’s.
Available ebook formats: epub mobi pdf lrf pdb txt html
First 20% Sample: mobi (Kindle) lrf pdb Online Reader
Price: $6.49 USD
Buy Add to Library Give as a Gift
How gifting works
Create Widget
Tags: vampires gay ghosts zombies lesbian contemporary shapeshifter transgender asexual
About Sophie Whittemore

Sophie Whittemore is a Dartmouth Film/Digital Arts major with a mom from Indonesia and a dad from Minnesota. They’re known for their Gamin Immortal series (Catch Lili Too) and Legends of Rahasia series, specifically, the viral publication Priestess for the Blind God. Their writing career kicked off with the whimsical Impetus Rising collection, published at age 17.

They grew up in Chicago and live a life of thoroughly unexpected adventures and a dash of mayhem: whether that’s making video games or short films, scripting for a webcomic, or writing about all the punk-rock antiheroes we should give another chance (and subsequently blogging about them).

Sophie’s been featured as a Standout in the Daily Herald and makes animated-live action films on the side. Their queer-gamer film “IRL – In Real Life” won in the Freedom & Unity Young Filmmaker Contest (JAMIE KANZLER AWARDS Second Prize; ADULT: Personal Stories, Third Prize) and was a Semifinalist at the NYC Rainbow Cinema Film Festival.

Their prior works include “A Clock’s Work” in a Handersen Publishing magazine, “Blind Man’s Bluff” in Parallel Ink, a Staff Writer for AsAm News (covering the comic book convention was a dream), and numerous articles as an HXCampus Dartmouth Correspondent. Ultimately, Sophie lives life with these ideas: 1) live your truth unapologetically and 2) don’t make bets with supernatural creatures.

Reviews of Catch Lili Too by Sophie Whittemore

A fresh take on paranormal thrillers. One of the books that I really just couldn't put down this year. The vampires and witches and just all the fictional elements were funny, fresh, and new. Highly recommend!

You have subscribed to alerts for Sophie Whittemore.

You have been added to Sophie Whittemore's favorite list.

You can also sign-up to receive email notifications whenever Sophie Whittemore releases a new book.