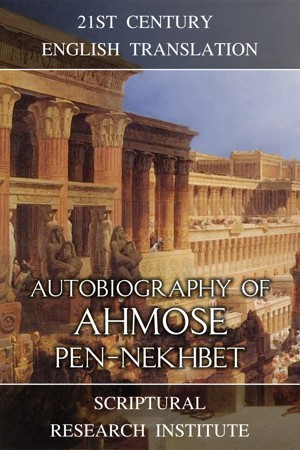 Ahmose Pen-Nekhbet’s autobiography does not mention the Battle of Avaris, which had taken place a few years earlier, implying he became the king’s herald after the Hyksos dynasty lost Avaris. Egyptologists debate what exactly Pen-Nekhbet meant by Djahy, and some believe King Ahmose I may have marched his army north from Sharuhen through southern Canaan to restore order in the region, however, there is no corroborating evidence of this known, and there is no reason to assume he wasn’t talking about Sharuhen, as Sharuhen was in Djahy, the ancient Egyptian name for southern Canaan.

Ahmose Pen-Nekhbet then mentioned serving King Amenhotep I in the campaigns in Kush, where he captured slaves, like Ahmose Pen-Ebana. Unlike Pen-Ebana, however, Pen-Nekhbet only mentioned one campaign in Kush, which implies that he did not partake in most of the campaigns in Nubia unless those stories were lost in the damaged sections. Pen-Nekhbet’s story also includes a reference to a campaign against what appear to be the Berber tribes of the Sahara. He referred to a campaign against the Iamu-Kehek, which includes the name Kehek, a Libyan tribe later mentioned during the reign of Ramesses III, circa 1188 BC. The Thebans are recorded to having occupied the five oases of the western desert during their war against the Hyksos, including the Kharga Oasis, Dakhla Oasis, now dry Farafra depression, Bahariya Oasis, and the Fayyum. This reference to the Iamu-Kehek implies the army of Amenhotep I pushed west through the Sahara desert, likely to Siwa Oasis, where an ancient oracle temple of Amen existed by the 10th century BC.
Available ebook formats: epub
Price: $2.99 USD
Buy Add to Library Give as a Gift
How gifting works
Create Widget
Tags: kush hatshepsut thutmose iii ahmose pennekhbet ahmose i amenhotep i djahy thutmose ii