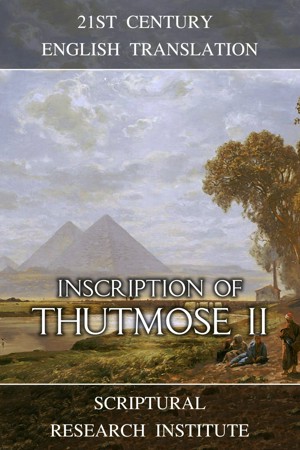 The inscription must have been written on the return leg of the journey from Kush, as it describes the victory over the Nubians. The inscription begins with the list of titles of the pharaoh, which includes a list of lands that the king rules. This list of countries includes the expected lands of Upper and Lower Egypt, the lands of the Minoans (Haunebu) in the Nile Delta and Sinai, the Lands of Phoenicians (Fenkhu) in Canaan and Syria, and the lands of the Nubians in Kush and the Eastern Desert. This description of Egypt implies that the southern frontier at the time was somewhere north of the sixth cataract. Based on the Autobiography of Ahmose Pen-Nekhbet's descriptions of Thutmose I's campaigns, stretches of both the Yellow and Black Niles were likely subject to the Egyptians at the time as well.

Based on the described insurrection in the first year of Thutmose II's reign, supported by Egyptian settlers among the Nubians, it seems likely there was more to the story than was reported in the surviving Egyptian records. If the insurrection was not coincidentally in the first year of Thutmose II's reign, then it was caused by Tuthmose II assuming the throne, which implies one of the southern commanders of the Egyptian army led the insurrection, likely another claimant to the throne as Thutmose I's eldest son and designated heir Amenmose severed in the army as a Great Overseer of Soldiers. It is believed that Amenmose had died before Thutmose I had died, which is why his younger son Tuthmose II assumed the throne, however, given the politics of the Egyptian court at the time, it is possible Amenmose was stationed in Nubia when Thutmose I died, and Thutmose II stole the throne from him.
Available ebook formats: epub
Price: $2.99 USD
Buy Add to Library Give as a Gift
How gifting works
Create Widget
Tags: kush nubia minoans phoenicians haunebu thutmose ii black nile fenkhu yellow nile