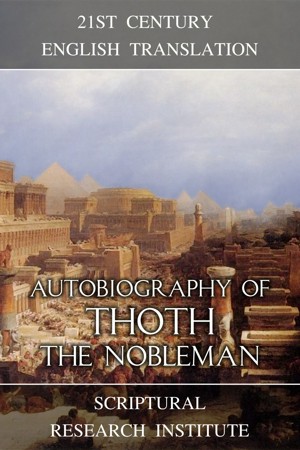 Autobiography of Thoth the Nobleman

Graffiti depicting a female or hermaphrodite pharaoh having sex with a man was discovered in an incomplete temple near the Mortuary Temple of Hatshepsut, which is generally assumed to have been a representation of Senenmut, however, only the image survives without any writing that identifies the man, who could have been any Egyptian man, including Thoth the Nobleman, or simply intended as a representative figure of a generic male intended to insult the 'king' by depicting 'him' as a female. As this graffiti is depicted close to the massive and iconic Mortuary Temple of Hatshepsut, it is clear that at least some of the men in Egypt did not view her as a 'king' even late in her reign, which supports the rebellion of the 'Wicked-Evil Kushan' in the Syrian Rivers province for the first eight years of her reign in the Septuagint's Book of Judges.

Thoth the Nobleman described working on many major projects throughout the reign of Queen Hatshepsut, including her Mortuary Temple, the Temples at Karnak, and the mysterious Hahut, a great sanctuary of Amen on his horizon in the west, which may have been an early reference to the Oracle Temple of Amen in the Siwa Oasis. Thoth the Nobleman also reported working on the ceremonial boat of Amen called 'Amen's Mighty of Prow.' Three centuries later, when the High Priest of Amen Her-Heru attempted to replicate this deed, it led to the problematic Voyage of Wenamen.
Available ebook formats: epub
Price: $2.99 USD
Buy Add to Library Give as a Gift
How gifting works
Create Widget
Tags: hatshepsut karnak thoth thutmose iii senenmut thutmose ii hahut mortuary temple of hatshepsut