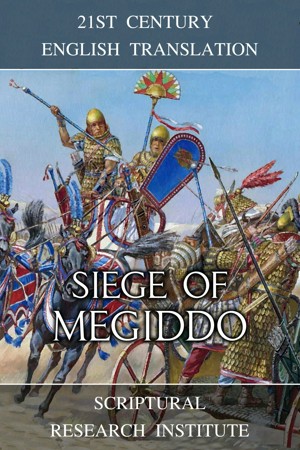 By Scriptural Research Institute
The legionary Siege of Megiddo took place at the beginning of Thutmose III's reign, against the king of Kadesh and his Syrian allies, and was inscribed in detail in the Annals of Thutmose III at Karnak. The details of the battle inscribed at Karnak, were copied from Thutmose III's scribe Tjaneni's journal, and is a far more detailed account than the subsequent list of battles. More
Thutmose III was the king of Egypt between circa 1458 and 1425 BC, after inheriting the throne from his father Thutmose II and his aunt Hatshepsut, however, after Hatshepsut died Thutmose III claimed to have been the king of Egypt throughout Hatshepsut's reign, meaning his regal years began circa 1479 BC when his father Thutmose II died. This attempt to erase Hatshepsut as a king of Egypt was likely not personal, as he did not attempt to usurp her authority during his life, but more likely an attempt to restore the respect for the kingship that appears to have been lost while Hatshepsut was on the throne. The graffiti of Hatshepsut having sex with a man, found near her mortuary temple clearly shows that she was not respected the way the previous god-like pharaohs had been, and Thutmose III was almost certainly trying to erase was many Egyptians viewed as a distasteful episode of their history. Ironically, her mortuary temple is viewed as one of the greatest architectural monuments of the New Kingdom and served as the bases of all later mortuary temples of the New Kingdom. Thutmose III did not attempt to erase Hatshepsut's existence from Egyptian history, just her kingship, and she was still spoken of fondly as the 'queen' and 'favorite wife of Thutmose II.'

Her reign seems to have been one of contracting frontiers, as Egypt appears to have lost control of Syria early in her reign, which Thutmose III quickly reversed, launching an invasion of Syria within his first year on the throne. This was the legionary Siege of Megiddo, against the king of Kadesh and his Syrian allies, inscribed in detail in the Annals of Thutmose III at Karnak. The details of the battle inscribed at Karnak, were copied from Thutmose III's scribe Tjaneni's journal, and is a far more detailed account than the subsequent list of battles and plunder taken during Thutmose III's subsequent invasions of Northern Canaan and the Mitanni Empire in modern Syria, or his campaign against the Nubians.
Available ebook formats: epub
Price: $2.99 USD
Buy Add to Library Give as a Gift
How gifting works
Create Widget
Tags: mitanni kadesh karnak megiddo thutmose thutmose iii tjaneni

Reviews of Siege of Megiddo by Scriptural Research Institute