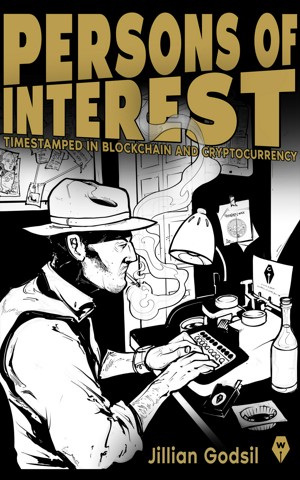 By Jillian Godsil
This book is for anyone interested in this sector, focusing on the saucy, thoughtful, quirky, energised, crazy, intelligent, and inspiring players in the space. From world Presidents to Models on OnlyFans – this line up could only be found in the weird and wacky world of blockchain and cryptocurrency. More
Persons of Interest

Timestamped in Blockchain and Cryptocurrecy, Vol 1 2020

This book is for anyone interested in this sector, focusing on the saucy, thoughtful, quirky, energised, crazy, intelligent, and inspiring players in the space. From world Presidents to Models on OnlyFans – this line up could only be found in the weird and whacky world of blockchain and cryptocurrency.

Andreas Antonopoulos – ‘We must be patient’

John McAfee ‘On his tombstone – Lover, Adventurer and Poet - but not yet.’

Vít Jedlička ‘Who has thought about founding a country?’

Samson Williams ‘Nothing in Space is Free’

Jillian Godsil has been a writer since she was very little. She had no doubt as to this career in her first decade of life. On entering her teens, she was just as adamant but strangely found little time to actually write fiction, only a few scattered attempts echoing whatever book she happened to be reading at the time. Into her twenties, she found university and then travel absorbed her time. She lived in London, Sydney and Singapore, before returning to Ireland with her first husband and first child. For her thirties it was all marriage and her children, two girls, which occupied her, as did a very demanding job and restoration of a period house in Wicklow, South Ireland. It was as she approached her forties, she suddenly went ‘Whoa! Where are my novels?’ and realised for all her talk she hadn’t actually started let alone finished any novels. In her final year of her thirties she sat down and wrote her first children’s novel, The Bell Tower. After this breakthrough, it only took her another six years and a divorce to write Running out of Road

Jillian has a masters from Trinity, runs a busy public relations company, is a freelance journalist, was responsible for the Ultimate Job with her business partners, has two fantastic girls, some horses and a dog and cat. She is still very busy with her life but now finds time to write.

Personal Anecdotes: When I explained a little about my novel to my sister, especially the strong language and scenes of an adult nature, she suggested I publish under my ex-husband's name and bring shame on his family instead! lol

Reviews of Persons of Interest by Jillian Godsil

You have subscribed to Smashwords Alerts new release notifications for Jillian Godsil.

You have been added to Jillian Godsil's favorite list.

You can also sign-up to receive email notifications whenever Jillian Godsil releases a new book.