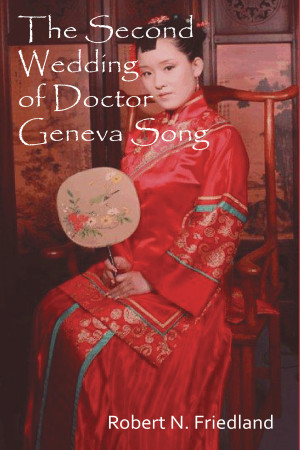 By Robert N. Friedland
Doctor Geneva Song's Chinese wedding ceremony is traditional, but she marries outside of her race and culture. This ancient ritual sets in motion a fateful journey from the light to the dark for Geneva, her Spirit Sister, and the men who love them. More
Excerpt

"Doctor Geneva Song's two aunties sat in honoured seats at the Chinese wedding ceremony and chattered away in voices too loud because they were both, more or less, deaf. They were the older sisters of Geneva Song's mother. The eldest sister, "Comes a Little Brother", or Auntie Ruth, had never emigrated from Hong Kong, but had flown into Calgary for the wedding. The middle sister, "Hopes for a Little Brother", or Auntie Leah, had moved to Calgary twenty years before, but had never learned to speak English very well. Calgary was where Geneva's father, Malcolm Song, had made his enormous fortune.

What the middle sister was explaining to her older sister was why on earth Geneva had decided to marry a man almost thirty years older. To be fair, it was a question that was on the minds of many, if not most, of the wedding guests. "He's a lawyer," the middle sister said, pointing to the, "Esq." after Sam Victor's name on the wedding invitation, "That's what the 'Es-Ka.' means".

"Es-Ka?" asked the older sister, not comprehending the meaning of the word.

Born in New York City in 1947, Robert N. Friedland has been the Sheriff of a Judicial District; an investigator for the United States Treasury Department; a Regional Director of the Alberta Human Rights Commission; Human Rights Advisor for Malaspina University-College; a two-term City Councillor in Victoria, British Columbia; and, Chief Lawyer for a group of seven First Nations in the Interior of British Columbia. He currently practices human rights and administrative law in Vancouver, British Columbia.

He is a widely published commentator on the international, Canadian, and British Columbian political scene.

Reviews of The Second Wedding of Doctor Geneva Song by Robert N. Friedland

You have subscribed to alerts for Robert N. Friedland.

You have been added to Robert N. Friedland's favorite list.

You can also sign-up to receive email notifications whenever Robert N. Friedland releases a new book.