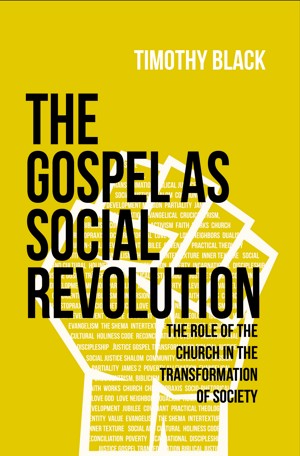 The Gospel as Social Revolution: The Role of the Church in the Transformation of Society

By Tim Black
The church is equipped to bring transformation to any community on the planet, but it seldom takes advantage of this opportunity. The Gospel as Social Revolution is aimed at waking this sleeping giant, armed with the historical and biblical evidence to motivate the change our broken world desperately needs. Practical guidance for Christians ready to make a difference! More
The 'good news' of Jesus, properly understood, will change the world. Jesus was clear: Love God, love your neighbor as you love yourself. We have separated the holistic teaching of Jesus into two categories, word and deed, creating a dualism that leaves neither side with the full story.

This book grew out of research, but it is practically focused on helping the Church see its role in the transformation of society by caring for its neighbors. It is a multi-faceted argument, looking at Evangelical and church history to guide the present, modern developmental practices to assist strategy and a socio-rhetorical examination of James 2 to anchor it all in Scripture. All in all, the goal is to encourage the church to retrieve its mantle and reach a lost world by holistically bringing transformation--both physical and spiritual--through the power of the gospel.
Available ebook formats: epub mobi pdf lrf pdb txt html
First 10% Sample: mobi (Kindle) lrf pdb Online Reader
Price: $6.99 USD
Buy Add to Library Give as a Gift
How gifting works
Create Widget
Tags: social justice practical theology poverty alleviation christian community development biblical justice evangelical history james commentary sociorhetorical interpretation south african theology
About Tim Black

Tim grew up in Scotts, Michigan, wandering off to Virginia as a 17-year-old to study and run. After a stint in Law School, he met his wife, Leslie, and eventually settled in Blacksburg, Virginia as an entrepreneur, part-time track coach, and Church youth leader while Leslie practiced veterinary medicine. In 2003 they moved to Cape Town, South Africa, with two young boys that began an adventure that continues to this day.

Tim earned an MA and Ph.D. from the University of Pretoria and serves as General Director of Scripture Union South Africa along with serving on an eldership team at Commonground Church. Leslie volunteers at a local township school teaching Maths and running afterschool Bible clubs, amongst a million other things. Their two sons grew up in South Africa: James married Mackenzie and lives in Virginia, and William lives in Cape Town.

You have subscribed to alerts for Tim Black.

You have been added to Tim Black's favorite list.

You can also sign-up to receive email notifications whenever Tim Black releases a new book.