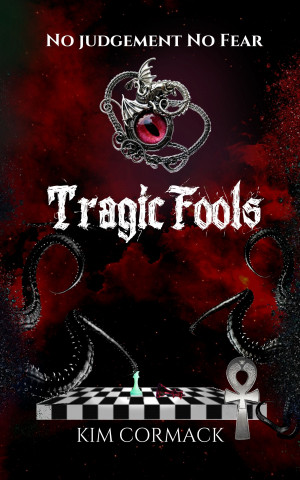 Check out this teaser.
She’d been asleep for a day and a half. She needed to feed her ability but didn’t want these new people to know she fed off immortal energy. It might make things awkward. Killian smelled amazing. He had sweet, tasty, potent pheromones. She needed to get out of here. She wiped her brow. Her throat was so dry, she could barely swallow. If she ate them all, they’d have a nice long nap. Usually, someone called her out on her feral inner commentary by now. Maybe they couldn’t hear it? That was unfortunate, survival of the fittest wise.
Available ebook formats: epub
Price: $3.99 USD
Buy Add to Library Give as a Gift
How gifting works
Create Widget
Tags: dark comedy science fiction and fantasy science fiction humor new adult lgtb fantasy paranormal romance authors paranormal romance books for adults new release sci fi 2021 paranormal books for adults what is an anti hero
About Kim Cormack

Kim Cormack is the dark comedy loving author of the Children Of Ankh Universe. She worked for over 16 years as an Early Childhood educator in preschool, daycare, and as an aid. She has M.S and has lived most of her life on Vancouver Island in beautiful British Columbia, Canada. Currently, she lives in the gorgeous town of Port Alberni. She's a single mom with two awesome offspring. She has a son in grade 10 and a daughter in University at VIU.
If you bump into this author, slowly back away. Toss packages of hot sauce at her until you escape.

A Note From The Author.

I began writing this series shortly after my M.S diagnosis. I had many reasons to fight. I had incredible children, family and friends, but this series gave me purpose. Whenever things become dark, I use my imagination to find the light within myself. No matter what life throws your way, you are stronger than you believe. I hope the character's strength becomes an inner voice for the readers who need it. Stand back up, and if you can't stand, rise within yourself. We are all beautiful as we are. We are all immortal.

All heroes are born from the embers that linger after the fire of great tragedy.

She slept a dreamless sleep free of dragons for she had slain them once again.

Fantasy adventure, magical realism, non-stop action with laughter, tears and a coming of age paranormal romance that will capture every reader's heart. A story of a teenage girl who overcomes tragedy and evolves into something she never knew possible as her immortal destiny comes to light. This paranormal fantasy will leave you breathless as it takes you through the darkness and leads you back out into the secret world of immortality triggered by choices in the afterlife.

The end of her life is only the beginning of her story.

This series is what would happen if Hunger games and Divergent hooked up and had a baby!

A comic romp through the afterlife with three Clans of naughty, certifiably insane antiheroes who battle while collecting partially immortal teenagers as they survive the exterminations of their family lines on their sixteenth year. If they've impressed the Guardians of the in-between with their bravery, they shall be granted a second chance at life as sacrificial lambs for the greater good. They must join one of three Clans of immortals living on earth and can be stolen at random by any other Clan until their eighteenth birthday.

She had never coveted the role of princess. She'd always wanted to be the hero.

Would you live your life differently if you knew the Correction was coming for you? They have allowed you to live until the age of sixteen because they want you to fight back. Your family line will be erased from this world sometime around your sixteenth birthday. You and your twin sister were never meant to be born. There will be no place to run and nowhere to hide. You won't even know they are coming. Could you survive your Correction?
Do you have what it takes to leave your humanity behind?
If your answer is yes, then hold on tight.

Behind The Series ☥

One thousand years ago, procreation became illegal under the immortal law. Any suspected offspring will be allowed to live until the age of sixteen. At this time, a Correction will be sent to erase their family line. If your bravery has impressed the Guardian's of the in-between, you may be granted a second chance at life as a sacrificial lamb for the greater good in one of the three Clans of immortals living on earth, Ankh, Trinity or Triad. The symbol of your Clan will be branded into your flesh, and with this mark, you will no longer be permitted through the hall of souls each time you die. At eighteen you will be sealed to your Clan. They will train your partially mortal brain to adapt to immortality. Your next feat will be, Immortal Testing where you will be dropped into a floating magical Crypt the size of New York City into a Testing fuelled by your worst nightmares. In this personal hell, anything can happen. Here, you must die thousands of times to prove yourself capable of being immortal. Three Clans go into the Testing. Only the first two to reach the Amber Room will earn their freedom.

Warning: Information contained within this series is not intended for mere mortals. Reading this may inadvertently trigger a Correction. If you survive or have shown great bravery during your demise, you may be given a second chance at life by one of the three Guardians of the in-between. For your soul's protection until your 18th year, you must join one of three Clans of immortals residing on earth, Ankh, Trinity, or Triad. You are still reading this, aren't you? Buckle up.

Sleep, sweet sleep till the morning
Just dream away and close your eyes
My love, you'll be safe until the morning
Sleeping in my heart, all through the night
Although bad dreams come to scare you
My love will scare them all away
My heart
The lights flickered, the pain went away, and her mother was holding her, singing "Sleep, sweet sleep."
The Beginning

The Children Of Ankh Series Universe

Children Of Ankh Series Novellas
Bring Out Your Dead

Would you live your life differently if you knew the Correction was coming for you? They have allowed you to live until the age of sixteen because they want you to fight back. Your family line will be erased from this world sometime around your sixteenth birthday. You and your twin were never meant to be born. There will be no place to run and nowhere to hide. You won't even know they are coming. Could you survive your Correction?
Do you have what it takes to leave your humanity behind?
If your answer is yes, then hold on tight.
You can find the series trailers and the teaser online. If you find me somewhere out there in the vast world of social media, I would love to hear from you. P.S My American friends, Uk and Canada spell some words differently.

Correction: The scheduled execution of all partially immortal offspring and their genetic line.
Ankh, Trinity and Triad: Three Clans of immortals living on earth. You must join one of the three Clans if you survive your Correction. They train you for Immortal Testing.
Testing: At the age of eighteen, you become sealed to your Clan. All of the newest members of each Clan train for Testing. Immortal Testing is a floating crypt the size of New York City, containing your worst nightmares where you must die thousands of times to prove your partially mortal brain can withstand the trials of immortality. Three Clans enter and race for the Amber room. Only the first two will be set free. The third remains lost their worst nightmares.
Tombs: If you survive the Testing, you have earned your own healing tomb generating from your Clan's stone. Example, Clan Ankh is rose quartz, Triad is jade, Trinity is sapphire.
Guardians: Three Guardians created each Clan of immortals. Beings, resembling angels from the in-between.
Crypts: Homebase's for each Clan, scattered all over the world.
Dragons: There are green scaly Dragons in this series, but in most cases, the word Dragon refers to the ability to turn off emotions. Lexy is the Dragon of Clan Ankh. A Dragon is used as an assassin.

You have subscribed to alerts for Kim Cormack.

You have been added to Kim Cormack's favorite list.

You can also sign-up to receive email notifications whenever Kim Cormack releases a new book.