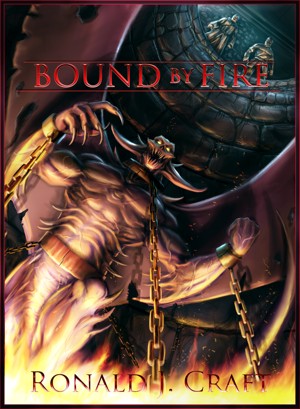 By Ronald Craft
Rated 3.00/5 based on 1 review
An ancient promise.
A forgotten treachery.
Seven souls, bound by fire, will begin their quest for the truth.

I grew up surrounded by books, and this hasn't changed in the slightest. The only difference now is that I'm writing them as well as reading them. I've read countless fantasy novels, and I'm still not tired of them. In fact, I always hunger for more and simply cannot get enough.

That's part of the reason that I delved into writing, as I wanted to contribute my own unique take on fantasy with my own characters and world. I write for the pleasure of others, as well as myself, and hope that my writing will bring entertainment to all those that read it.

I hope you enjoy my writing and I welcome any and all feedback!

Reviews of Bound by Fire by Ronald Craft

This story centers around Ilian who is kidnapped by a red-haired assassin, Karena, for a reason that he's not all too clear about. We are also treated to the journeys of Kane, who is searching for Ilian, and Rodrach, who is looking for the answers of far too many questions.

Ronald Craft has written a very interesting and fast-paced story. The main characters are well-developed and believable. They're not set to just one way of thinking and do change over the course of the story. Also, the way everything was brought together in the end was very well done.

However, the side characters much less believable. It feels like all the "villains" act in relatively the same way. They're all jerks who fight in an underhanded way and once they lose, turn into cowards who beg for mercy. Also, while ambiguity is useful for getting a reader interested, too much of is a deterrent. For the first half of the book, we don't know what's driving the "bad guys". Karena is taking Ilian to see her boss, for some reason. Chaerak feels compelled to go to the North, for some rea- okay, you get the point. I also felt like there were some inconsistencies between Dagfinn and Bale. They both called each other the "evil brother" at one point or another. Of course, it could be a set up for the next book. Who knows? Another thing is that Ilian acts far younger than his supposed age. If I didn't know better, I'd think he was ten yrs old! Still, his character developed and I was pleased to see him change by the end of the book.

Overall, I would recommend this book to anyone looking for a good read, especially fans of fantasy and action. Even though it's not perfect, the book is clearly well thought out. I had a lot of fun reading this so maybe you will too! However, I would point out that younger readers shouldn't read this as some scenes are pretty violent and others are pretty...naughty.

Won in a giveaway in return for a honest review

You have subscribed to alerts for Ronald Craft.

You have been added to Ronald Craft's favorite list.

You can also sign-up to receive email notifications whenever Ronald Craft releases a new book.