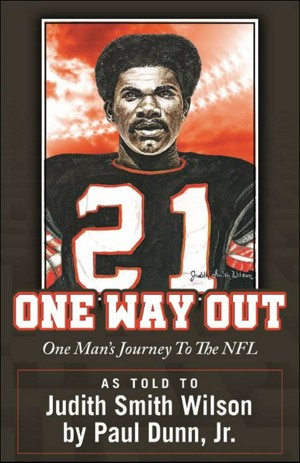 One Way Out: Paul Dunn Jr’s Journey To The NFL

From the time Judith Smith could hold a pencil or crayon she was drawing and coloring. She loved all animals and many of her first paintings were of horses and wildlife. She grew up in San Diego, California, during the Second World War. Her fraternal grandmother took care of her while her parents worked. Her grandmother was influential in encouraging her to draw, even saving many of her first sketches of people. At the age of five the family moved to a small town. It was in the country, and Judith and her dog, Blackie soon became acclimated to the different life style, chasing lizards, snakes and all sorts of critters.
In high school she was an art major, and hoped to go on to an art school in Los Angeles to become a fashion designer, but she was young and her parents did not want her to live that far from home. She began her professional art career at twenty five after she married and her one daughter was four and the other a baby. She has sold many paintings and prints all over the world, and won awards, but she always loved keeping a journal about her adventures, and writing letters to friends and family. They would remark to her how funny and informative her notes were.
When times were financially tough Judith would go back to the only profession that she was trained for, that of a Collection Manger collecting delinquent bills for a living. She loved it as she could use her writing talents in collection letters in fact her manager would always tell her how efficient her letters were, and they brought in a lot of delinquent money.
In the l980’s after her two girls were grown, she fulfilled one of her dreams, to travel. She has traveled extensively, to Kenya, East Africa three times, and Rwanda, East Africa once, and took many photographs and wrote about her great adventures on Safari. She also traveled to Hawaii, Hong Kong, Japan, Tahiti, the Island of Morea, and the Yucatan Peninsula, viewing the ruins of Tulum.
This is her first memoir about her families twenty year trials and tribulations in living with a rescued female Bobcat named Precious.

You have subscribed to alerts for Judith Smith Wilson.

You have been added to Judith Smith Wilson's favorite list.

You can also sign-up to receive email notifications whenever Judith Smith Wilson releases a new book.