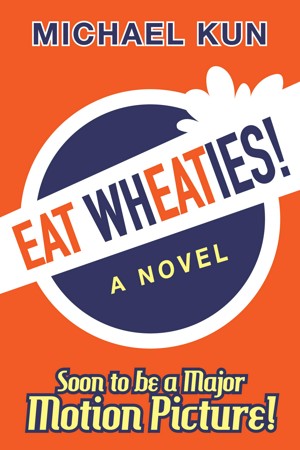 Until he decides to fight back.

Told through a series of one-sided correspondences with the television star, his bosses, his girlfriend, and various lawyers and PR representatives, Eat Wheaties! is a farcical look at celebrity in today’s society.

Praise for Michael Kun and Eat Wheaties! (originally published as The Locklear Letters)

A BookSense No. 1 Selection

“A writer in the vein of J.D. Salinger.” The Richmond Times-Dispatch

“A quick and enjoyable tour of the lighter, funnier side of dementia.” —Kirkus Reviews

"I don't think I've ever laughed this hard! Ever!” —Pat O’Brien, Access Hollywood

“Its air of droll desperation and sweetly uplifting finale are perfect for those sweltering days when tackling anything more substantial would bring up a sweat.” —The Village Voice

Michael Kun is the author of works of fiction and non-fiction. Among other recognitions, his novel You Poor Monster was a Barnes and Noble “Discover Great New Writers” selection and was chosen as “Book of the Year” by Baltimore.

Reviews of Eat Wheaties! A Wry Novel of Celebrity, Fandom and Breakfast Cereal by Michael Kun

You have subscribed to alerts for Michael Kun.

You have been added to Michael Kun's favorite list.

You can also sign-up to receive email notifications whenever Michael Kun releases a new book.