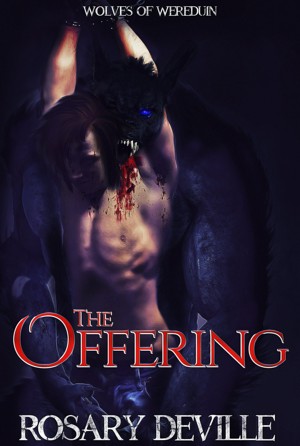 Rated 5.00/5 based on 4 reviews
A Highborne alpha will stop at nothing to claim Fern’s heart, body, and soul. More
As a beta in Wereduin society, Fern has no choice but to be mated when he comes of age. The ideal beta wereduin was subservient to their alpha, bears young, and knows their place in society.
Fern isn't like that.
Rather than become an extension of his alpha, Fern wants to play in his band, hang out with his friends, and stay himself.
Now of age, Fern is to be placed in the Offering—an annual ceremony where alphas hunt and claim their beta mates. And whose attention does Fern attract? None other than Donovan Blackfang, a Highborne alpha who will stop at nothing but to claim Fern’s heart, body, and soul.
Available ebook formats: epub mobi pdf lrf pdb txt html
First 20% Sample: epub mobi (Kindle) lrf more Online Reader
pdb
Price: $2.99 USD
Buy Add to Library Give as a Gift
How gifting works
Create Widget
Tags: mm erotica bdsm erotica dark erotica erotica gay sexy erotica erotica ebook dubcon erotica gay erotica mm
About Rosary Deville

Rosary is an author of erotica ranging from sweet and fluffy, to dark and taboo. She aims to foster a sex-positive experience for readers to indulge their fantasies in a fun and safe space. Sometimes she uses her writing to journey into the often hidden and taboo depths of human sexuality, and hopes readers will take away from her stories, not an acceptance of violence and sexual abuse, but rather a way to embrace their inner desires often shamed by society.

Reviews of The Offering by Rosary Deville

I very much enjoyed this book. Fern is strongheaded, snarky, and isn't afraid to stand up to his potential Alpha. Until the third Offering he's determined to fight against the whole process and Don. Donovan is hard-headed, on a rare occasion when he feels Fern is putting himself in danger he will be physically abusive to get his point across. I got the feeling there is more to Donovan than we're seeing in this book. Hopefully I'll see those hidden parts in the next book.

I loved Fern's zombie and vampire friends. Their band as well though I wish there was more of the band playing (or even just practicing) in the book.

The book is written only in Fern's POV. Despite the non-con/dub-con in the book it's written in almost a lighthearted manner after the first Offering. It's not what I would consider a dark romance in the slightest. (Though I do consider the world the book takes place in on the dark side.) The book doesn't end on a cliffhanger, but it's not the whole story in book one either. It continues into book two.

I really liked this story! The cliffhanger was so cruel, and I can't wait for the next one!

Loved Fern and Don. Now need the next book as this one ended with a cliff hanger. Love the chemistry between these guys.

You have subscribed to alerts for Rosary Deville.

You have been added to Rosary Deville's favorite list.

You can also sign-up to receive email notifications whenever Rosary Deville releases a new book.