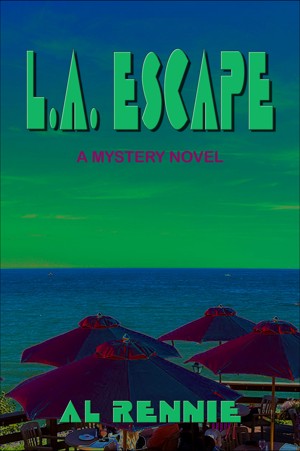 By Al Rennie
Al is a rich Canadian who wakes up in a holding cell. He needs a lawyer. The story he tells the man is L.A. Escape. He hired an ex-cop, Norm, to help him find an actress who is identical to his dead wife when she was young. They meet and spend days together before she is found dead in an alley. He has become a person of interest. He hires Norm in an attempt to clear his name and find the killer. More
A wealthy Canadian has fatally shot someone. He needs legal help. The story he tells his lawyer is L.A. Escape. He is in California because he has seen a film with an actress who is the exact image of his dead wife when he first met her. He is desperate to meet this woman. He hires a detective to help him find her. He meets the actress and an arrangement is made. Two days later she is found dead in an alley and he has become a person of interest to the L.A. cops. He re-hires his detective friend to help him clear his name and find the murderer and in the process uncovers a web of drugs, blackmail and intrigue.
Available ebook formats: epub mobi pdf rtf lrf pdb txt html
First 10% Sample: epub mobi (Kindle) lrf more Online Reader
pdb
Price: $2.99 USD
Buy Add to Library Give as a Gift
How gifting works
Create Widget
Tags: romance mystery los angeles racetrack
About Al Rennie

You have subscribed to alerts for Al Rennie.