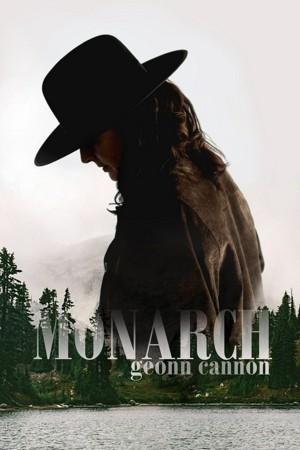 Claire and her wife, Jodie, have been settled for six years in the quiet Washington island town of Squire’s Isle. Claire’s about to become sheriff. She faces a lifetime of whale-watching tourists, traffic tickets, dine-and-dashers, and purse snatchers. Her dark past and days on the run are behind her. But a secret criminal operation and the murder of a fellow police officer show that her days of being Claire Lance, vigilante folk hero, may never be over.

Reviews of Monarch by Geonn Cannon

So, the sixth book in the Claire Lance series after a hiatus of seven years. As anyone who's read volume five will know, Claire and Jodie retired to Squire's Isle after her exoneration and this book is set there.

For those who have only read Geonn Cannon's Claire Lance books and haven't read his Squire's Isle stories, Squire's Isle was first featured in a book back in 2006, called On the Air, in which the protagonist gets accidentally outed and has to deal with the fallout from that. I went back over it before writing this review and was surprised at how grim a story it was (though it has a happy ending.) Geonn then wrote many stories set in Squire's Isle (which can be bought from Smashwords in collected volumes), all of which have a happy, feel-good atmosphere as the island metamorphises into a "Lesbian Paradise" (something the author calls attention to more than once). Claire and Jodie aren't the first of his characters to retire there, and we meet a couple of the others in this book.

I mention this because I found something of a tonal clash. The Claire Lance stories are all very dark, crime-ridden, angst filled books and this one is no exception. Yet it happens on Squire's Isle, a happy, feel-good sort of place, and this was, at first, disconcerting. I'll come back to this.

Anyway, Claire and Jodie's idyllic retirement is disrupted when the Sheriff - Claire's boss - uncovers evidence of the activities of an OCG at work on the island. From then, the story develops as usual, Claire working to uncover and disrupt the activities of the OCG whilst they, in turn, strike at her and the people around her. And this is where I felt the tonal clash. For example, Claire informs the mayor that an OCG is working on the island, as any sheriff would - but the mayor is Patricia Hood-Colby, who we know from many Squire's Isle stories, as we also know her wife and children, who we also meet.

At first this seems wrong - what are the Hood-Colbys doing in a story this dark? - but I got it eventually when, at one point, the mayor expresses frustration and disgust at the thought of the activities of the OCG on her island - and it clicked then. All the other Lance stories have involved similar activities by OCGs in similar towns - but this time it was in a town we know, the people of which are well developed and well-known to us (if we've read the stories that is). The mayor's sense of disgust is all the more palpable because we share it , to some extent - this is our island too.

And so the story had an added resonance and also chimed in with Lance's thoughts - that, this time, she's fighting to defend her home and people she knows and cares about, rather than strangers.

So, yes, it was a good book. I'm kind of hoping that it'll be the last one, though. I mean, I'm not averse to seeing Claire and Jodie in the odd Squire's Isle story, maybe even as the subject of a few. But if there are more Claire Lance books set on the island, it runs the risk of making Squire's Isle into a place like Midsomer, Adensfield, Brokenwood or Wildemarsh - small, sleepy little towns with a crime/murder rate higher than Los Angeles.

Besides, it'd be nice to think that Claire and Jodie retired to a happy, feel-good place like Squire's Isle, where the worst Claire has to deal with is the occasional shoplifter or RTA. They've earned it.