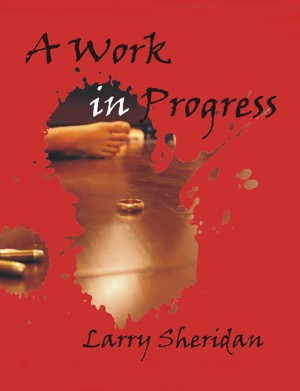 A Work in Progress

Born in San Mateo, California, as the youngest of six children, Larry Sheridan occupied himself early in life by constructing stories through his imagination. In his 20’s he moved to New York City where he lived in Hell’s Kitchen (prior to the re-gentrification of the area in the 1990’s). While living there he gained much insight into the society of the underworld. During his Hell’s Kitchen years Sheridan travelled the world tracking and helping capture diamond smugglers.
Though this is Sheridan’s first novel delving into a world filled with thrilling conspiracies, his experiences and inherent ability to capture and hold one’s imagination make this novel one you will not want to put down.
Presently, Sheridan works for a major international investment and financial services firm while residing in Atlanta, Georgia.

Fast paced, ‘A Work in Progress’ will make you late for supper and keep you up way past your bedtime – you will not want to put it down until the last page is turned. Well developed characters and a plot with many twists and turns make this thriller a winner.

The main character, Jeremy Jackson, is a financial wizard, so to speak. However, where there is money, there are always investors – and not always legitimate. Money laundering, conspiracy theories – who can he trust? His body is aching and his mind is growing wearier by the day. He receives a letter from his darling wife, Cassie, in which she informs him that she and the children have been taken captive. She tells him that the house is bugged and that her involvement was all an act in order to try to save them. Is this a trap - another set-up, or could she be telling the truth? Are there terrorist involved?

Non-stop action, heroic characters, and ultimate suspense make this an electrifying thriller – one ‘Oliver Stone’ would be proud of! If you are a fan of ‘John Grisham’s work, then I think you will enjoy reading ‘A Work in Progress’ by Larry Sheridan – as this author too has a promising skill for writing in the thriller genre!

Jeremy Jackson is about to experience life as if he is the primary actor in an episode of the Twilight Zone, What you are about to hear will enlighten the reader and help you understand that life throws you definite curves, appearances are deceiving, things happen and situations can be orchestrated, created and unexplainable. Jeremy started his day like any other going through his normal routines, but this day would turn out to be anything but that. So, why would Jeremy be contemplating using a gun? What could make this intelligent and rational man want to resort to violence?

As he states, let’s start at the beginning! Revved up like a racecar motor, excited about closing a potential business deal, Jeremy prepares to go to the airport and fly to LA. Events that happen forewarn him that something might go wrong and things feel off balance. Premonitions, we all have that sixth sense or unnerving feeling that makes us wonder if we should get out of bed in the morning. We get that gnawing, nagging feeling that something is not right. But, do we listen to our inner voice or self, or just ignore it, shrug it off as just plain nerves or paranoia? Can you retrace your thoughts or double back when something seems wrong? So, when Jeremy relates to the reader his argument with his wife Cassie, things he’s hiding for the from her, seeing a black cat staring at him when he leaves the house and a violent encounter with a police officer plus getting rear ended, do you think maybe a warning or siren should have gone off in his head and yelled: STOP and THINK? But, Jeremy leaves the house, speeds to where he is going, gets stopped by a violent officer and meets one gorgeous woman at the airport who sets a plan in motion that you won’t believe and neither will he. Conniving, cunning, definitely outfoxing our Jeremy he falls prey to her wiles, and never suspects what is happening to him until it’s too late. Helping him through security, getting on the plane and not realizing that what he thought he was taking in meds was anything but his real prescription.

Waking up feeling disoriented, unable to focus and unbalanced he thinks its stress, or just under the weather never suspecting the truth. You hear his fears, his frustrations, anger and inner most thoughts as Jeremy tries to figure out what is happening to him and the author takes you on a journey that will be anything but someone’s nightmare but definitely during the day. Trying to process what is happening and the events, he can’t. Maybe it’s something he ate or drank or something unknown. Able to understand most things but being unable to process and put the facts together and in some order, Jeremy takes a journey into another world that he never expected.

Every man needs an assistant to prepare his schedule, make appointments, take phone calls and keep his day straight. Tish is Jeremy’s trusted assistant. For all appearances she seems to be the perfect assistant able to coordinate his life, make sure that everything goes right, get the deals in order and make sure that Jeremy rakes in the money. As a financial advisor he comes in contact with huge amounts of money that he handles for clients. But, when he meets his driver and arrives at the airport things happen that make you realize there is much more to this meeting than meets the eye. John Stephens is the name of the man who is his driver. Appearances are not what they seem as you will learn. Tish, his assistant appears to want to help him close this multi-million dollar deal at all cost. But, when the meeting is over and the plan is presented to the group of men present, Jeremy thinks all is well, but is it? Ross Holder is the man in charge of the meeting and the group that he is presenting to. Who is Ross and what his connection to the truth behind the deal and the group funding it remains to be seen. As the men assemble in the conference room the games begin. Jeremy once again addresses the reader explaining how the players appear to him, but who are they really and what are they really after? After all this is Las Vegas and the stakes are higher than the payout in black jacks or roulette.

As the meeting begins Jeremy thinks out loud to himself, switches gears, changes his plan and his presentation hoping to engage his audience, make a better impression and close the deal. Three strategies that are proposed yet not embracing any one. Engrossed in his presentation those present seem to be listening, hearing what he is saying, taking notes for further discussion. Questions flying, making, final decisions not made. But, as Jeremy leaves there are three more groups waiting in the wings to present their plan to win over and get the account for Portfolio K. Who will be the victor?

Returning home he sees his wife Cassie, expresses his true feelings, his thoughts about their past, their lives and their future. Regaling how life has its disappointments, joys and hoping to recapture some of their beginnings. But, then something happens, snaps him out of his reverie. Cassie begins to yell, scream and his vision is blinded and he does not know where she went or what happened to his children. Winding up in a car with his driver, his vision limited and his facts confused, he is not sure whether he dreamed what happened or if it is real. Jeremy’s lack of perception and reality become his norm, disoriented and confused his world turns dark but he has no idea of the cause. Thinking he was in a car accident and in a coma for two weeks he awakens finding himself in restraints, his driver present and the truth about his identity revealed. What he learns frightens him, changes his perspective on life, his job and those he thought he could trust. Learning what is expected of him, who might be behind the deceit, the deals, and his supposed accident not only angers him but also puts him and his family in grave danger. As things progress he’s made to believe that he is in another car crash causing the deaths of several people, defending himself against an intruder in his home and finding out that one nurse is anything but what she appears to be and much more. Why? Threats, innuendos, intruders, police brutality, messages that are given and implants within his body to prevent him from not complying with the plan, Jeremy begins to not really know who or what he is. Would you squawk at getting an account that brings in over 300 million dollars? Would you complain if your assistant were so efficient that the financial benefits of what she has done are astronomical? Would you care if what she is into was illegal money laundering, deceit, murder and fraud? What if you tried firing her and learned you cannot? Who is behind the deals, the group that claims it works for the government? Where is the money coming from and what part does this John play, Tish and even his wife Cassie? Who can he trust? Anyone? Why are there so many bodies piling up and why is his world becoming surreal, contrived and totally orchestrated by a master conductor?

Author Larry Sheridan takes the reader along with Jeremy on a dangerous roller coaster ride with so many twists, turns, ups and downs, curves and fast paced speed that you won’t see the end coming and the final outcome will keep you on edge until you turn to the last page and find out the truth.

Life like a house of cards or dominoes can come falling down in a flick of a finger or wink of an eye. As the pieces fall into place and the truth behind the deception revealed what will happen to Jeremy, what will his final fate be and what will happen to his life, as he knows it? One ending that will have the reader hoping that Jeremy will come back again in another novel written by this outstanding and creative author. What is the final outcome? What exactly is the Company and when and how did it start? Well, there are cameras, bugs, videos, and surveillance equipment all over the place so that this reviewer will not reveal the secrets nor tell you the final outcome. This is one book you definitely want to read and one author who has taken the mystery/thriller genre by storm. Watch out Larry Sheridan is definitely going to be right up there with Steve Berry, James Grippando and Daniel Silva. Will Jeremy remain a work in progress or will he become a finished product? You decide when you read this Five Star Novel.

You have subscribed to alerts for Larry Sheridan.

You have been added to Larry Sheridan's favorite list.

You can also sign-up to receive email notifications whenever Larry Sheridan releases a new book.