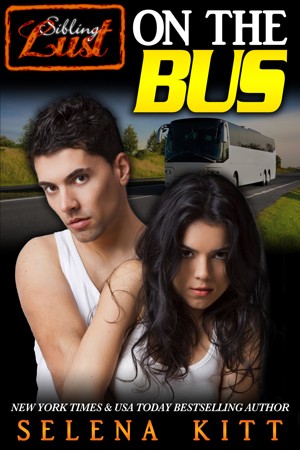 Sibling Lust: On the Bus

Two siblings on a cross-country trek to California find more stimulation than just the scenery! Emily is getting tired of listening to Danny practice trivia for his Jeopardy try-outs, and both of them are anxious about meeting Danny’s dad again after years of separation, but neither sibling could have predicted that a journey of forbidden sexual exploration would begin for them together on the bus.

Warning: This title contains shameless displays of pseudo-incest between step-siblings so scandalously hot it could get them arrested for starting a fire on a crowded bus!

Her writing embodies everything from the spicy to the scandalous but watch out-this kitty also has sharp claws and her stories often include intriguing edges and twists that take readers to new, thought-provoking depths.

Her books, Babysitting the Baumgartners, Adventures with the Baumgartners, Heidi and the Kaiser and Unfolding are now adult films by Adam & Eve, directed by Kay Brandt.
She can be reached on her website at www.selenakitt.com

It is impeccably written, with a complete backstory and believable intervals leading from the purely platonic to sex. If only it were truly taboo, and not just technically so by a whisker. The promise is a brother and sister having sex with strangers potentially watching. The reality is more like two friends becoming lovers, before getting married in church.

Public sex at its best. Another great book from Selena Kitt.

Soooo hot, sweet and tender!!! I love the step-sibling trope because it usually deals with an "excess of love", and I think the author did a great job of portraying this... those complicated, jumbled, but oh-so-real feelings.

You have subscribed to alerts for Selena Kitt.

You have been added to Selena Kitt's favorite list.

You can also sign-up to receive email notifications whenever Selena Kitt releases a new book.