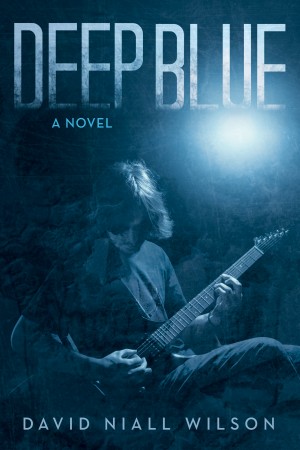 By David Niall Wilson
Rated 5.00/5 based on 1 reviews
Brandt is a drunken, self-loathing guitarist. When he locks himself out of his apartment and stumbles into an alley filled with trash can fires and the homeless, he is gifted - or cursed? - with the ability to play blues like he's never heard...at a price. He must play to release the pain of the world before it drives him mad. There is another who wants that pain to grow... More
From award-winning author David Niall Wilson, what Publishers Weekly calls : "...an engrossing, poetic novel of spiritual evil..."

Brandt is a down-and-out guitarist and vocalist who believes his life has hit rock bottom. He can't make the rent on his apartment, he drinks so much he can barely make it to the crappy gig that keeps his band afloat, let alone play when he gets there. When he leaves the bar one dark night with a bottle of Jose Cuervo in one hand and his guitar case in the other, he finds he’s locked out of his apartment with no where to go.

In an alley filled with trash can fires and homeless vagrants, Brandt meets Wally, an old black man who can play the music that Brandt dreams of – the blues. In the ensuing encounter, Brandt is gifted – or cursed – with new abilities. He feels the pain building up around him and inside him. Not his own pain, but the pain of others, the pain of those who have passed away, the pain of those who died with no one to hear their stories. He becomes a conduit for the pain of the world.

What follows are a series of revelations, one for each member of the band, and one for a young girl named Liz, drawing them together, and ultimately reuniting them with Brandt. Together, Brandt, Sinthia, Shaver, Dexter and Liz take off to the mountain town of Friendly California for a date with pain, destiny, and a silver haired Reverend who would like to see them dead. In the final showdown, they must meet the challenge of the music, the pain, and their mingled histories and stand, or fall, with the pain of the world in the balance.

"Wilson demonstrates that a horror novel doesn't need gallons of blood to succeed, that spiritual terror can be even more effective." - Publisher's Weekly

"Through some great musical imagery and engrossing sub-plots, David Niall Wilson has written a captivating story that is full of surprises." - SF Site -Featured review

"Wilson paints liquid rainbows when he describes each band member's experience behind his or her newly-rediscovered instruments and skills, and if this were all that the book were about, it would be enough. But there's plenty more going on in Deep Blue to satisfy the author's fans (who are used to him not sticking to genre conventions) and to draw in plenty of new ones." Craig's Booklist Reviews

Are you a music lover? Have you ever found yourself slipping away, lost inside the notes of a great tune? If so, you will love this book!

Wilson brings us a down and out band, playing in dive bars and drinking way too much alcohol. They're all in search of that one song that will be their own; the one that will bring them fame. Then a chance encounter between one member and an old man playing achingly beautiful blues on a harmonica takes them on a strange journey that changes all their lives. We crawl inside the musical notes and experience the pain and redemption in a way I've never experienced with a written word.