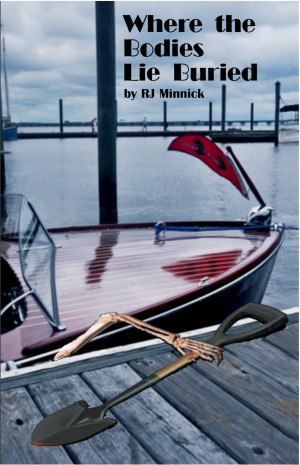 Where the Bodies Lie Buried

By R.J. Minnick
When Mackenzie Russell Wilder returns home to take over Dr. Kesselman's medical practice, she thinks she'll spend her future taking care of patients and relaxing on the Hudson River in her classic Chris Craft runabout. But skeletons uncovered on the old family farm seem to dictate otherwise.

Was her outlaw father responsible, as New York State troopers think? Or can she and Bryan prove otherwise? More
When Mackenzie Russell Wilder returns home to take over Dr. Kesselman’s practice , she expects to spend her time taking care of patients and relaxing on the Hudson River in her classic Chris Craft runabout. But skeletons uncovered on the old family farm seem to dictate otherwise.

Residents of Kings Hill and New York State Troopers think her father had something to do with those skeletons. As bad as her renegade father was, Mackenzie never thought he’d kill anyone.

Now she’s not so sure.

With suspicions about her father poisoning her return and tangible resistance to her medical practice , maybe Kings Hill isn’t the best place for her after all.

Mackenzie is determined not to be run off, especially with the way her easy friendship with Lt. Bryan Jamison is ramping up. She wants to stay, but who’s trying to drive her out of town? And why?

Where the Bodies Lie Buried is the first book in the Mackenzie Wilder/Classic Boat mysteries, a series of romantic mysteries.

R.J. MINNICK has spent a lifetime working at various jobs (she even sold Fuller Brush!) and another lifetime raising six terrific offspring with her husband. During both those lifetimes she kept writing - poetry, reviews, short stories, nonfiction, mysteries, mainstream novels, and Christmas epics. She has credentials in national and local magazines and community news publications.
Where the Bodies Lie Buried is her first mystery, and the first in her Mackenzie Wilder/Classic Boat mystery series.

She grew up the youngest of five girls in upstate New York, then lived in Maryland and Vermont before settling in Nashville, Tennessee where her family spent 24 years before moving to North Carolina. With her children now adults, she has moved from being a full-time mom to being the family's on-call consulting guru. She is also a part-time Parish Administrator and occasional web designer.

For 16 of the years they lived in Nashville, RJ coached writing in their children’s schools. She now continues working with people who love to write by being part of a writer's group and by helping with local writing workshops.

She writes for a local magazine, ARRAY, but her fiction work is currently focused on novels.

R.J. Minnick lives in Fayetteville, North Carolina with her husband, two dogs, five cats and - from time to time - a child or two.

Review
Richard Houston reviewed on May 30, 2014
(no rating)
Where the Bodies Lie is more than a mystery of finding who killed the people buried on Mackenzie Wilder’s family farm. It’s also a story about family and discovery. In a way, the title has a double meaning, for we all have skeletons in the closet. RJ has an interesting and different way of writing a mystery. I found the characters to be far more rounded and three-dimensional than your average detective or PI novel. And did I mention the old boats. As an owner of at least a dozen boats during my time, I love what RJ added to the story with her classic Chris Craft.

I highly recommend this book to readers of Cozy Mysteries and those who like a well plotted and written story. I can’t wait to read what else RJ has written.

You have subscribed to alerts for R.J. Minnick.

You have been added to R.J. Minnick's favorite list.

You can also sign-up to receive email notifications whenever R.J. Minnick releases a new book.