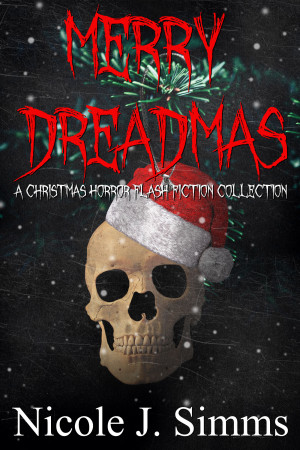 In this collection, the characters are all different, but they have one thing that unites them: they all learn that not everyone has a Merry Christmas; some have a Merry Dreadmas. More
Enjoy eight Christmas-themed horror flash fictions that’ll make you see Christmas differently this year.

In this collection, you’ll find the following spooky tales:

A woman meets her boyfriend’s parents for the first time and unknowingly brings the perfect Christmas gift.

A young man learns that no wish, not even a Christmas one, comes without consequences.

A young couple discovers that a Christmas Instagram challenge can be fatal.

A real Christmas tree doesn’t give a family the perfect Christmas they hoped for.

Santa and his reindeers are missing. And when Mrs Claus tracks them down, what she discovers is worse than she could ever have imagined.

A woman discovers the real meaning behind the nickname her boyfriend calls her when she visits his home for the first time.

A young boy gets more than he bargained for when he attacks an intruder on Christmas Eve.

A woman has an idea to kill her boss with poisoned mince pies, but her plan doesn’t give her the results she was expecting.

The characters in this collection are all different, but they have one thing that unites them: they all learn that not everyone has a Merry Christmas; some have a Merry Dreadmas.
Download: epub mobi (Kindle) pdf more Online Reader
lrf pdb txt
Price: Free! USD
Add to Library
Create Widget
Tags: horror christmas flash fiction horror fiction free book mild horror christmas book christmas horror fiction ebook flash fiction collection
About Nicole J. Simms

So far her stories have been published in magazines (e.g. Firewords Quarterly - Issue 4), websites (e.g. Flash Flood Journal 2015 & 2018) and anthologies (e.g. The Dark Bard edited by Catherine May). She also won the Nine Voices’ 2016 50-Word Halloween Competition with her story titled ‘Meeting the Parents’. And, you can also download her e-books Merry Dreadmas and The Book of Drabbles for FREE.

She’s the deputy leader of the Oldbury Writing Group, which is a writing group based in Oldbury, West Midlands. Together the group published a World War Two anthology titled From Sunrise to Sunset in 2016. They are now working on their second anthology.

Nicole is a contributor to the Horror Tree website — this is a resource for writers, which provides industry news, publishers with open markets and writing advice. Her column is called ‘Setting Self Doubt on Fire’, and here she writes blog posts aimed at writers who are struggling with self-doubt.

When she’s not writing, she loves to bake, knit, paint and watch her favourite television programmes, such as The Walking Dead, Fear the Walking Dead, Game of Thrones, Grimm, The 100, Supernatural and Charmed (old and new). She also enjoys exploring nature reserves, historic buildings and places or any place that can inspire a story.

Surprisingly, her favourite colour is pink, which many find odd considering her love for all things horror.

You have subscribed to alerts for Nicole J. Simms.

You have been added to Nicole J. Simms's favorite list.

You can also sign-up to receive email notifications whenever Nicole J. Simms releases a new book.