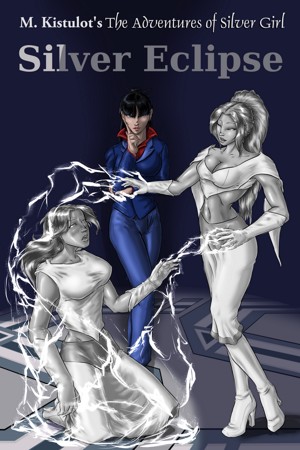 Just as Silver is finally starting to adapt to her new normal, everything is threatened. Who is targeting Silver, and why? Is it the witch’s coven wanting revenge, or something more sinister? Trying to unravel that mystery may be more dangerous to her happiness than the answer itself.

Ink on the page, and ink in the blood, I've been writing since I can remember and nothing has ever fascinated me more than playing with the concepts of control, obedience, and the self. Since 2005 I've been using fiction to explore these concepts. This generally involves a copious amount of women being very intimate with other women, but how better to make any journey more fun along the way than with company?

I don't like to write the same story twice, but exploring the same concept from different angles is a must. You can expect my writing to be focused on characters, their feelings, their thoughts (or their lackthereof) and to have these things be challenged, or played with, or explored through intimacy, dominance, submission, hypnosis, and other methods of mind control. As a practicing hypnotist myself I know that it has very real limits, but sometimes in fiction it can be fun to suspend one's disbelief just a little, and my stories tend to reflect that. Fiction should feel real, but also be a bit larger than life. Enticing. Tempting. Just out of reach.

I like to play in different genres, with different styles, but it all comes back to some very simple concepts: women controlling other women, women losing control with other women, and women being very close with each other. If any of this sounds appealing, then I think we're going to get along just fine.

About the Series: The Adventures of Silver Girl

Sarah "Silver Girl" LaSilvas has her life change forever when she's invited to join Chronos, an organization that pays metahumans and gives them training, supplies, and other things they need to be successful. She doesn't like the sound of that, but what happens when she goes to say no in person changes her life forever...

Also in Series: The Adventures of Silver Girl

If you liked The Adventures of Silver Girl (tAoSG), you will probably like Silver Eclipse (SE), too. (I'll explain the "probably" in a moment.) But that's not because SE is a rehash of the first book. Not even close. SE firmly establishes the Silver Girl series's intentions to tell a complex, intricate, and engrossing story, one that will take place over several volumes. If SE is any indication, each book will be meaningfully different from its predecessors, and that makes me incredibly happy.

There's no doubt that SE will appeal to tAoSG readers. It's chock-full of dark, twisted mind-controlling fun. If i recall correctly, there's only a single speaking character (not counting Silver herself) who appears in both tAoSG and SE; the new cast means a whole new collection of mind controllers, a whole new collection of methods, and all sorts of fascinating new settings, plot twists, and character interactions.

So what makes SE different from tAoSG? First, it's a lot sexier. tAoSG had a tendency to "fade to black" right when a scene would approach physical intimacy. In SE, the sex is described in all its glory. To me, it feels like the author got a lot more comfortable describing sex and intimacy, and it makes the story feel more complete. Second, it's a lot darker. The core setting in tAoSG offered a certain degree of coziness and comfort; this is absolutely nowhere to be found in SE. Some readers might have enjoyed tAoSG by pretending that Chronos was more light and fluffy than it actually is, but SE forces readers to confront the darkness directly. Finally, SE isn't afraid to challenge and dissect its characters (not literally!) in a way that tAoSG mostly shies away from.

Overall, i think SE is a stronger, richer book than tAoSG was. It combines and amplifies the heat of tAoSG with whole new levels of character development and story arcs. tAoSG could have been a standalone novel that could have been endlessly repeated, pulp-style; SE is an inseparable part of what is clearly going to be a long, epic story. So if you liked tAoSG -- and if you liked it for reasons other than pretending that Chronos was actually consensual somehow -- you owe it to yourself to read SE, too.

You have subscribed to alerts for M. Kistulot.

You have been added to M. Kistulot's favorite list.

You can also sign-up to receive email notifications whenever M. Kistulot releases a new book.