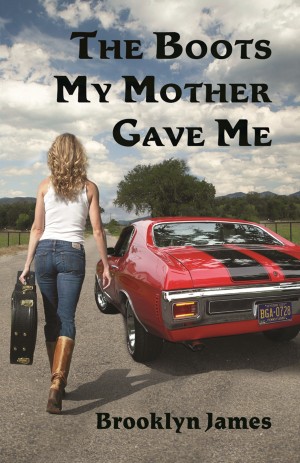 The Boots My Mother Gave Me

By Brooklyn James
An Amazon Breakthrough Novel Q-Finalist. Determined to be more than her abusive father and enabler mother, Harley LeBeau refuses to play the victim. In this atypical Dysfiction, the strong-willed, quirky, coming of age heroine is a mass of contradictions. Armed with formidable pride and a deep desire to believe in something or someone, the nonconformist Harley incites readers to turn the page. More
An Amazon Breakthrough Novel Quarter Finalist.

Have you ever wondered what it would be like to walk through life in someone else’s shoes?

Strong-willed tomboy Harley LeBeau puts you in the boots her mother gave her, as she takes you along her journey of escape from an abusive childhood and the desire to find herself as she comes of age. Made to feel a burden to her father simply by her gender, Harley is determined to prove her worth and independence, leaving the small town she grew up in and the one boy who gave her a soft place to fall, Jeremiah Johnson. Torn between saving herself and abandoning her mother and younger sister, Harley chooses her own life in hopes they will choose theirs, too.

A mature, candid read for everyone. A must for women. The Boots My Mother Gave Me explores the dynamics of abuse and dysfunction, the courage to overcome, the strength in sisterhood, and the ongoing conflict and unconditional love between mothers and daughters.

Climb into Charlene the Chevelle for a fast-paced story about a girl who is tough enough to survive and tender enough to learn to trust in love.

Brooklyn James is an author/singer/songwriter inspired by life in the Live Music Capital of Austin, Texas. Her first novel, The Boots My Mother Gave Me, has an original music soundtrack and was chosen as a Quarter Finalist in the Amazon Breakthrough Novel Awards. This book has ranked in Kindle's Top 100 Coming of Age and Women's Fiction.

When she is not writing books, she can be found playing live music around Austin as part of an acoustic duo. Like most everyone, she treasures her time spent with family and friends. Brooklyn has been in a Weezer video, met Harry Connick Jr. as an extra on the set of When Angels Sing, and she was Mira Sorvino's stand-in on Jerry Bruckheimer's Trooper pilot for TNT. She enjoys reading, dancing, working out, fishing with her hubby, and a good glass of kombucha.

Brooklyn holds an M.A. in Communication, and a B.S. in both Nursing and Animal Science. Her nursing career has seen specialties in the areas of Intensive Care and Postpartum. She serves as a Guest Speaker with a focus on awareness and prevention of Domestic Violence and Suicide.

Find her at www.brooklyn-james.com or www.facebook.com/BrooklynJamesAuthor. You can also find her music on Amazon, iTunes, CDBaby, YouTube, and Pandora.

Reading from The Boots My Mother Gave Me
Amazon Breakthrough Novel Q-Finalist, The Boots My Mother Gave Me, excerpt, Introduction: My Almond...Harley LeBeau's armor in managing growing up in an abusive household. "Brooklyn James' soundtrack to her novel does more than give a clever feminist twist to the title. Her songs serve as chapters themselves, underlining James' deft ability as a storyteller and songwriter." -Austin Chronicle

You have subscribed to alerts for Brooklyn James.

You have been added to Brooklyn James's favorite list.

You can also sign-up to receive email notifications whenever Brooklyn James releases a new book.