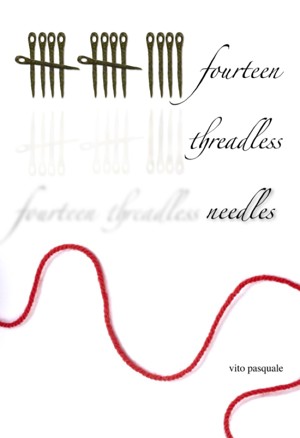 — Can you pose for me, sitting in this chair in the sunlight?
— Why?

— I need to be able to see you clearly—to describe you perfectly.

— Can't you change your mind? Your heart?
— Can I do the poem first?

— Only if it's nonabstractly unambiguous about the state of my undress.

— I don't think I have the right words with me. I left them home by accident.

I discovered Vito’s poetry online by chance but connected with it immediately. Although I’m a poet myself I dislike more poetry than a like and so to find a poet who consistently produced material that make me think or sometimes just amused me is an achievement in itself. Many of Vito’s poems are slight and if you saw a single one in a magazine you might read it, nod and pass on by. The full effect isn’t realised until you’ve read a sequence of his poems as you get the chance to here. This is something that a lot of poets don’t take enough care of. They publish a book with twenty or thirty poems in it but there’s no overall theme or flavour to the collection. That is not the case here. There is a story, a progression from college through marriage and ending in old age—like a family album. The 4-star rating is not to say that this collection is not good but I think he has potential for more. I’m also a little wary of 5-star reviews especially for first collections. Seamus Heaney’s first collection deserves 5-stars and Philip Larkin’s and Walt Whitman’s. 5 stars should mean something.

You have subscribed to alerts for Vito Pasquale.

You have been added to Vito Pasquale's favorite list.

You can also sign-up to receive email notifications whenever Vito Pasquale releases a new book.