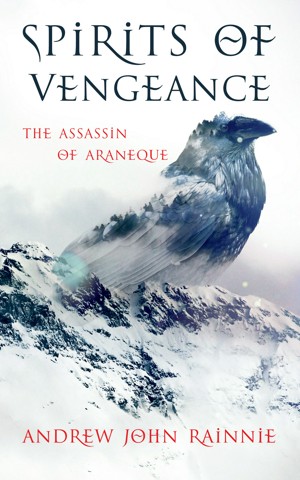 Spirits of Vengeance: The Assassin of Araneque

Kamina Elloeth has been training to become the first elven ranger, but when a new threat emerges, putting her brother's life in danger, she is forced to abandon her teachings and become a renegade. Pursued by her fellow rangers, she must wrestle her demons and discover her inner strength before she is ready to face off against the Assassin of Araneque. More
After saving the world from the fire god Risaar, tree elf Kamina Elloeth chose to join the legendary Ishkava Rangers. But when a new threat emerges, placing her brother in the crosshairs of an assassin, Kamina is forced to abandon her teachings and turn rogue.

Guided by her vengeance spirit Callaghan Tor, Kamina must journey across the lands of Enara to extinguish the threat. When she learns the assassin’s true identity, it triggers a race to restore the balance of magic across the land.

Andrew John Rainnie is a Scottish novelist, screenwriter, and filmmaker. He has an MA. Joint Honours in English Literature and Film & TV Studies from the University of Glasgow, and an MA/PGDip in Screenwriting from Bournemouth University.

He has written and directed a number of short films, which have shown at festivals around the globe. His last, The Collector, based on a short story by Jonathan Lethem, was shown at the London East End Film Festival, the London Short Film Festival, and Aesthetica Film Festival in York.

After working as a media analyst and script reader in London for six years, Andrew quit the rat race and embarked on an epic around the world adventure, details of which were published in a compendium of his travel blogs, titled My Right Leg Is Tastier Than My Left. During that journey, he finished writing a passion project, his first fantasy novel, Spirits of Vengeance: The Stone of Spirits.

Reviews of Spirits of Vengeance: The Assassin of Araneque by Andrew John Rainnie

You have subscribed to Smashwords Alerts new release notifications for Andrew John Rainnie.

You have been added to Andrew John Rainnie's favorite list.

You can also sign-up to receive email notifications whenever Andrew John Rainnie releases a new book.