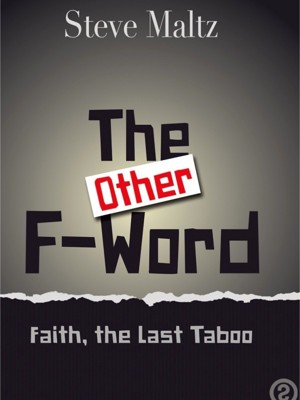 The (other) F Word : Faith, the Last Taboo

This is a story that began before time itself. It is a story of unrequited love, a love that transcends dimensions, a love that has been reaching out, from age to age. But it is a love rejected.

The object of this love is indifferent. It rejects this love mainly because it believes it has found better, but also because it has forgotten how to respond. It has a deep need to correct this, but doesn’t know how to go about it because there’s a missing ingredient.

Faith – the missing link between God and man. The dreaded “F-Word”. The last taboo.

Dare you boldly go where modern man fears to tread? You’ll be either inspired or provoked, either way it should be an interesting experience.

Christianity, warts and all. Dare you?

"This is a clear and straightforward evangelistic book, written with real style and panache, and a genuine sense of humour. But at the same time it is serious and God-honouring. I genuinely think that not since C S Lewis have we had a Christian author who has addressed his current generation in such a culture-attuned way. In much the same way that Lewis brought to bear cogent arguments to an intelligent 1950s/60s readership, so too Maltz anticipates and explores the key questions posed by a post-Christian, post-modern mind set. Any genuine searcher would benefit from this book – and non-searchers might just be spurred to begin a search after engaging with Maltz. Also, this book, whilst not being targeted in a gender specific way, is certainly one that any Christian man could comfortably give to a non-Christian male. There is nothing in this that should cause embarrassment. Its not tub-thumping, just good plain Christian apologetic in a modern idiom." Peter Sammons, Publisher and writer

"In a very readable way, the book addresses the secular thinking that denies the existence of God with the reminder that we are all born with an ingrown Longing the only relief from which is the F word, Faith. This is a slim book that doesn’t take long to read, but what it has to say is of value to believer and unbeliever alike. Steve Maltz has a style of writing that keeps you reading and his hope is obviously that this book will get into the hands of those who need it desperately but do not necessarily know that they do. Many aspects of our faith are explained quite simply and difficult issues like un-Christian behaviour by professing Christians, which do such a disservice to Our Lord, are acknowledged with sorrow. One of the most honest and open defence and explanation of our faith that I have read. Highly recommended." Mary Bartholomew, The Good Bookstall

"an excellent explanation of what it means to be a Christian and, therefore, a good Christmas gift for those who are hovering on the edge of belief. Steve adopts a chatty, colloquial tone; the book, and the chapters within it, are short and to the point. I would recommend it to anyone." Mel Menzies, author

Steve Maltz is a freelance web consultant, writer, tour guide, blogger and the founder of Saffron Planet, the award-winning web radio initiative. This is his ninth book. He is married with three sons and two freeloading cats and lives in East London.

Steve is a Jewish believer in Jesus and well known in UK Messianic circles because of the success of his trilogy, The Land of Many Names, The People of Many Names and Jesus, Man of Many Names, which seek to explain Israel, the Jews and Jesus from a Jewish perspective. His latest book, "The (other) F Word" is starting to make a real impact in the UK, on the back of TV and radio appearances as well as promotions through conferences and church meetings.

He works as a freelance web consultant for prominent UK Christian radio and TV ministries, currently Premier Radio and Premier.tv. He has also worked as a tour guide (Jewish East End of London), software house manager, a systems analyst, project manager, software designer, website designer and a computer games designer. He is a veteran of the computer games industry. One game, Pettigrew's Diary, reached number 1 in the UK software charts and acclaimed by one magazine as the adventure game of the year. Another, Woodbury End, had been acclaimed as an all-time classic. The strategy game, Empire, was the first commercially available PC game produced by a UK developer. His design work in computer based training and interactive video was described as ground-breaking.

He has written five Christian comedy dramas (for Christmas, Passover, Feast of Tabernacles, Purim and Chanukah), that have been performed many times. He has written for magazines such as Sword magazine (prophetic Christian magazine) and Crossrhythms website (the most popular website in the UK for young Christians). He has also written numerous articles for Saltshakers and Saffron Planet. In 2002 he wrote a film screenplay, Savage Butterfly, that was a whisker away from being bought by a leading London agent and was complimented on by the BBC. He also has a drawer full of many unpublished manuscripts!

He published the very first Christian computer game in the UK in the 1980s (Jericho Road) and was responsible for designing and programming the following computer products for the PC: Conflict in Jerusalem, Risen!, The Jesus Story Begins, the Lion CDROM of the Bible & Christianity, the Hodder NIV Thematic Study Bible CDROM, Discover the Truth and eMessianica encyclopaedia.

He co-founded and maintains Saltshakers (www.hebrewroots.com ), one of the most renowned messianic websites in the World, on which he has made available two free books that he wrote in the 1990s, My Son the Christian!? (his testimony) and A Tapestry of Gefilte Fish (evangelism for Jewish people).

Dodgywriter Steve
The life and times of a writer of God books. Steve Maltz introduces his new book, The (other) "F" Word.

You have subscribed to alerts for Steve Maltz.

You have been added to Steve Maltz's favorite list.

You can also sign-up to receive email notifications whenever Steve Maltz releases a new book.