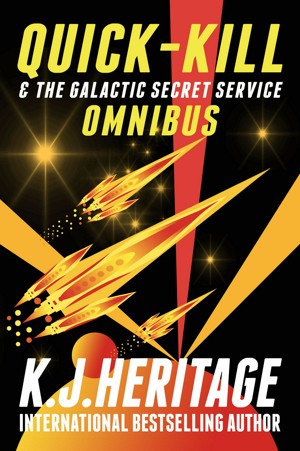 Quick-Kill is a self-made assassin and tekhead. But after a simple job blows up in her face, she finds herself running for her life. A life that is changed forever.

Quick-Kill is a self-made assassin and tekhead. But after a simple job blows up in her face, she finds herself running for her life. A life that is changed forever.

Never, ever, let yourself never get caught… who knows what may happen?

The forgotten, seedy backwater planet of Plenty (the most unfortunately-named world there ever was), is no place for a girl to grow up parentless and alone. But self-styled, femme fatale and genius gun-for hire, Quick-Kill Jane, was no normal kid. She learned her trade early on, making a name for herself. And by the time she became an adult, everyone feared and respected that name in equal measure.

In what should’ve been a straightforward job—one of the many she had built her reputation upon—she finds herself in pursuit of small-time criminal and wife-beater, Rollo Barla. But things do not go to plan.

She learns that the contract on Rollo was ordered by the Cabal—a loose network of galactic criminals, and that they, and the equally shady Galactic Secret Service, were now in competition to chase her down.

Quick-Kill must use all her considerable talents, skills and guile to stay one step ahead. But events take an unexpected and extraordinary turn.

A twist that will change Quick-Kill’s life forever…

And so begins Quick-Kill's adventures.

Quick-Kill
The "Do Or Die"
Bluetongue
Sirena

“This book is bloody marvelous! It's one of the most refreshing bits of sci-fi I've read in a while. Golden Age with a modern take.”

“fast-paced sci-fi read with a strong female character, lots of action, and some unusual plot twists.”

“…exciting and funny and down and dirty. A must read!”

“Another amazing bunch of characters, an intelligent, keep-you-guessing plot and a new gorgeous world beautifully realised by Kev Heritage”

“A well written rip-roaring tale with space ships, lasers, explosions and daring-do...what's not to like?”

“Fun, feisty and fast-moving, this is a highly enjoyable read”

“Brilliant, well-written and most fun book I've enjoyed for years!”

“Gun-slinging and explosions and secret missions are not my thing, but somehow I loved this one.”

K.J.Heritage is an international bestselling UK author of crime mystery, sci-fi and fantasy.

His first sci-fi short story, ‘ESCAPING THE CRADLE’ was runner-up in the 2005 Clarke-Bradbury International Science Fiction Competition. He has also appeared in several anthologies with such self-publishing sci-fi luminaries as Hugh Howey, Michael Bunker and Samuel Peralta.

He was born in the UK in one of the more interesting previous centuries. Originally from Derbyshire, he now lives in the seaside town of Brighton. He is a tea drinker, avid Twitterer (@MostlyWriting), and autistic (ASD) human being.

You have subscribed to Smashwords Alerts new release notifications for K.J. Heritage.

You have been added to K.J. Heritage's favorite list.

You can also sign-up to receive email notifications whenever K.J. Heritage releases a new book.