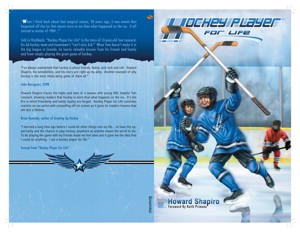 He plays in 2 tournaments in Canada before being unceremoniously cut. He returns to his old team and must earn his teammates and his coach's respect back. He becomes good friends with the team s worst player and they share a great bond and the worst player teaches him what it means to be a hockey player for life!

HOWARD SHAPIRO lives in Pittsburgh, PA with his wife and two sons. The Controller for the Pittsburgh-based Visual Effects firm, Animal Inc., he has also written four children’s books and The Stereotypical Freaks will be his debut Graphic Novel. His 2008 book, Hockey Player for Life, has been the #1 downloaded children’s hockey e-book on Amazon’s Kindle chart since its arrival as an e-book in November of 2011. His, Hockey Days book was the only book featured in the December 2007 Sporting News Annual Gift Guide as a Best Buy Gift for Children. Through a corporate sponsorship program he set up (and maintains), since the 2010-11 season, both of his children’s hockey books have been given to NHL teams (over 2,500 copies to date) for use in their community and educational initiatives. Since 2006 his annual charity raffle, which he matches dollar for dollar donated, has raised funds for several hockey-related charities including the Mario Lemieux Foundation, Hockey Fights Cancer and the Keith and Lisa Primeau Scholarship Fund. For more information, please log on to howardshapiro(dot)net

You have subscribed to alerts for Howard Shapiro.

You have been added to Howard Shapiro's favorite list.

You can also sign-up to receive email notifications whenever Howard Shapiro releases a new book.