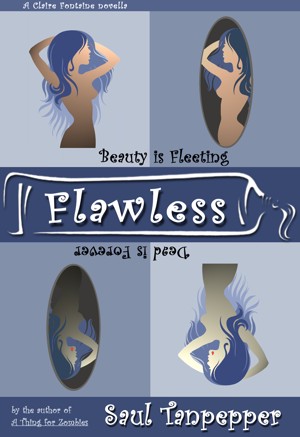 By Saul Tanpepper
Rated 4.00/5 based on 1 reviews
It's not easy being the hottest girl in school, but for Edgemont High senior Claire Fontaine, it's worth it. After meeting Trevor, the gorgeous new boy in town, she becomes the target of a stranger with a malicious agenda. Now she wonders, who is this perfect boy? What's his connection to the recent death of another Edgemont teen? How much will she have to sacrifice to save herself and keep him? More
Beauty is fleeting, but dead is forever.

For senior Claire Fontaine, just being beautiful won't cut it; she needs to be the most beautiful girl at Edgemont High. It takes a certain amount of sacrifice, but it's well worth it.

After the horrific death of another Edgemont teen under questionable circumstances, Claire finds herself in that most unthinkable of situations: unattached and with the senior ball just weeks away. Luckily, a new boy arrives in town just in time to rescue her. Not only is Trevor hot, he's flawless.

But soon, questions begin to arise surrounding Trevor and the suspicious timing of his arrival. Who is he? Could he be somehow connected to the recent death? How can someone be so perfect?

Claire's newfound happiness begins to crumble after she finds herself the target of someone with a deadly agenda. Can she do what is necessary to save herself and Trevor? Is she willing to make a much greater sacrifice to maintain appearances?

A Note from the Author:

Dear Reader,
In writing "Flawless," I wanted to tell a story about a girl who would do anything to maintain her beauty. Anything. In fact, in keeping with the theme, I had originally planned to title the book "Skin Deep," and to have the main character, Claire Fontaine, suffer a fate befitting her shallowness. But then I fell in love with Claire; she turned out to be a lot deeper than I had originally thought. I didn't want to just kill her off.

But isn't that the case with most people we meet and get to know? No matter how simple they may seem to be on the surface, so many of them turn out to be a lot more complex, a lot more interesting. And, in the end, maybe shallowness isn't really all that bad. Is it? Because, in the larger world of all possibilities, sometimes, hidden away in the dark, murky depths, far beneath the surface of the known world, there are terrors much, much worse.

I hope you enjoy reading "Flawless" as much as I enjoyed writing it.
Yours,
Saul
San Francisco, CA
November 16, 2011

Saul spent his formative years in a creaky century-old house overlooking the Erie Canal in Upstate New York. His bedroom was a refurbished attic, which he shared with all manner of creatures, not all, he is convinced, flesh and blood.

After bouncing around the US and Europe, he settled down to pursue a career in the sciences, opting to study the mysteries of human molecular genetics. But even positions as an experimental biologist, teacher, manager and biotech entrepreneur could keep him from his true love: literature.

eFiction magazine calls Saul a writer armed with "a PhD and a whacked out sense of humor." He now writes speculative fiction full time from his attic-less home in the San Francisco Bay Area, which he shares with his wife, kids, four dogs, three cats, six chickens and the occasional possum.

I'm a stickler for plot, and this story definitely has its weaknesses, but what it lacks in cohesiveness, it more than makes up for in intrigue and detail. As well as surprises.

The first third of the story was spent really introducing Claire to the reader. She's a shallow high school senior completely focused on her looks, so that immediately puts a bit of a barrier between her and the reader. But I found her likeable nonetheless, perhaps because her life isn't as perfect as you might think for the most beautiful girl in school. Things are a mess just beneath the surface, which, I guess, is what this story is about: appearances. So when bad things start to happen to her, I couldn't help but root a little for her.

I was quite intrigued by what happened to Dennis, beginning with how he died (the funeral scene at the very beginning was both disturbing and funny at the same time) and what the connection was to Claire. And the twist at the very end, though perhaps a bit abrupt, felt satisfying. At least it wasn't obvious from the beginning. Tanppper does a fair job of planting clues throughout. I totally guessed wrong about who Trevor ended up being, so that was a surprise.

I probably would've gone for three or three and a half stars, but the writing was good, the dialogue felt natural and the characters were interesting. The title suggests we'll see more of Claire; I'm intrigued enough that I'll probably get the next story featuring her.

You have subscribed to alerts for Saul Tanpepper.

You have been added to Saul Tanpepper's favorite list.

You can also sign-up to receive email notifications whenever Saul Tanpepper releases a new book.