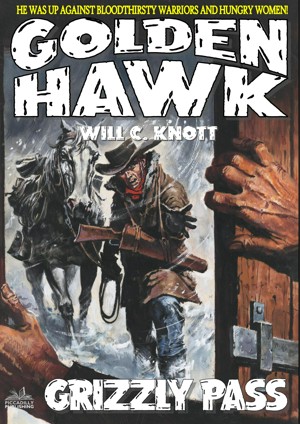 By Will C. Knott
Adult

William Cecil Knott was born in Boston, Massachusetts on August 7 1927. Following a stint in the US Air Force, he became a junior high school teacher and went on to continue his academic career in Connecticut, West Virginia, New Jersey and New York. Between 1967 and 1983, Knott was Assistant Professor (later Associate Professor) of English at the State University of New York. In his free time, he also carved out an impressive body of fiction, most of it in the western field. In addition to creating his own series, The Vengeance Seeker and Golden Hawk, he also contributed to the Stagecoach Station series (as Hank Mitchum), Slocum (as Jake Logan), Longarm (as Tabor Evans) and The Trailsman (as Jon Sharpe). Under the names Bill Knott and Bill Carol he wrote several children’s books, and also contributed to the WWII adventure series Mac Wingate, which is also being republished by Piccadilly Publishing.
Mr. Knott passed away in 2008.

Learn more about Will C. Knott

Reviews of Golden Hawk 3: Grizzly Pass by Will C. Knott

You have subscribed to alerts for Will C. Knott.

You have been added to Will C. Knott's favorite list.

You can also sign-up to receive email notifications whenever Will C. Knott releases a new book.